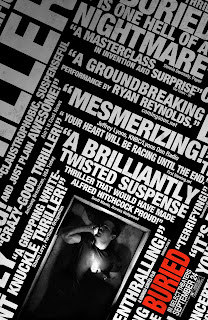 Paul Conroy, a United States truck driver working in Iraq, wakes up buried alive in the desert after his convoy was attacked by a group of terrorists. With only a lighter and a cell phone, Conroy must battle the threats of terrorists and race against time in order to escape.

After closing his eyes and turning off his lighter to preserve oxygen and to cure his case of anxiety, Conroy awakes to a snake crawling down the leg of his pants, and is now trapped with it in the casket.

Buried is a damn good movie. It really is. For a film that is shot with one actor, one location (a coffin), and a very simple plot, it does a great job of adding suspense, character depth, entertainment, a political message, and being downright gripping.

More so what makes Buried a great film is the performance of Ryan Reynolds. It can be said that Buried is easily the best movie he has ever done. As the film progresses, not only are we let in on the natural panic of someone being buried alive, but we also are let in on Conroy's family, his past, the ugly truth of corporate America, his reaction of a video of his friend being shot in the head by the terrorists, and even some ugly truths of the American government. Through it all, Reynolds emotion and intensity hooks the viewer as you can't help but begin rooting for this guy to get out of being trapped.

Gripping is usually overused in sound and description bytes for films, but Buried truly defines the word.