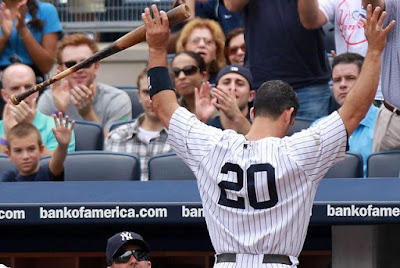 With his recent retirement announcement, the 2012  season will be the first one for the New York Yankees since 1994 without Jorge Posada. For many Yankee fans, the absence of number twenty in the lineup continues the unforgiving truth that our heroes from the late nineties are stepping away from the game. Now with Posada hanging up the spikes, the core four that has been lauded for their loyalty and consistency, is now down to two. And with the discussion of whether Posada, who continued a lineage of great Yankees catchers, should be placed in the Hall of Fame, his career is under a microscope more than anytime, moreso than when he played. And while fans, experts, analysts, statisticians, and even haters weigh in on either side of the HOF coin, there is a certain Jorge Posada that I hope does not get lost in the number crunching and reasoning, and it is summed up into two words: pride and grit.

As a now twenty-six year old man, I was fortunate enough to not only enjoy the wave of championships in the late nineties, but was old enough to understand the struggles of the early nineties teams when Yankee Stadium felt like an empty, outdated cathedral, with no one interested in the religion inside of it. There are recent rain delayed games with 11:05pm starts that have more people in the stands than some of the games I was at. Nonetheless, within those glory years, Jorge Posada was a mainstay and one of those cogs that  made that time tremendous. And he did so in such an underrated way.

For all of the attention that Derek Jeter, Mariano Rivera, Paul O'Neill, Andy Pettite, and Bernie Williams received, albeit well-deserved, Posada always seemed to have been the forgotten piece of the puzzle. Even taking a backseat when other hired guns donned pinstripes such as Alex Rodriguez, Roger Clemens, and Jason Giambi.

Despite the New York spotlight exclusion, Posada was the enforcer in so many ways. He was never afraid to stand his ground with headcase pitchers who disagreed with his game calling (See: Burnet, A.J; and Hernandez, Orlando). Yet, despite his tough love, you always heard stories of Posada knowing his pitchers, and what made them tick. From the positive reinforcement he always gave Clemens, to the meticulous game plan for Mussina, to the carefree and loose personality of David Wells, Posada knew how to get the most out of his staff. And as for the rest of the clubhouse, Posada had no qualms about getting in the face of those who violated the "Yankee way" to keep the clubhouse focused and in-line.

In fact, he also took that stern fiery love for the game on the field, never backing down from opponents. Who can forget the image of Posada standing on the top step in Fenway Park barking at Pedro Martinez and pointing at his head in confrontation during the 2003 ALCS?

How about some of my other favorites...

Facing the home dugout, Posada intensely clenches and shakes both hands in emotion after his bloop double in Game 7 of the 2003 ALCS.

His presence of mind  to not only cover, but to hold his position at home plate in order to make the tag on Jeremy Giambi in the famous "Flip play" by Derek Jeter.

Hitting the first home run in the new Yankee Stadium.

His raw outburst of emotion after the Yankees were eliminated in the 2011 playoffs.

And probably the image I will always remember Jorge Posada for, his once again famous double clenched fist pump and look to the heavens after the final out of the 2009 World Series.

And while it shouldn't have any bearing on his career, his extraordinary dedication to the game and his son, even during trying times, is the true testament of what Posada was as a player, and as a man.

He was full of, and the epitome of pride, grit and toughness. From his pine-tar covered helmet, his glove-less batting hands, his huge-rear-end that seemed to tug along while he ran, all the way to the simple custom of rubbing his hands in the dirt before every at-bat, Posada was just the blue-collar opposite to that of his star-studded teammates.

And with career totals of a .273 BA, 275 HRs, 1065 RBIs, .375 SLG, and a .848 OPS that will be debated for the next five years until his time is called for a possible HOF induction, it's the intangible details of pride and grit that truly made Jorge Posada's career special. Hopefully, characteristics that will be remembered amongst voters.