Making Sense of the Mets Mess

As Super Bowl XLVI is now set between the New York Giants and the New England Patriots, a Jets fan like myself could not be any more depressed about the possible outcome of this year’s big game. A season which was anticipated to be a joyful one, has crashed and burned like no other. However, as I dread the next two weeks of Super Bowl hype, I find myself thinking about Mets fans, and the feeling of embarrassment they must have as those four great words – pitchers and catchers report – nears. My Super Bowl misery is nothing in comparison to the no-light-at-the-end-of-the-tunnel hope they are experiencing.

Yes, I am a Yankees fan, and a die hard one, however, with all of the recent turmoil, mismanagement, and hopelessness that surrounds Citifield, I find it a bit harsh to revel in such gloominess. Heck, after all, as a big Knicks and Jets fan, I can somehow relate. I’ve made it known in the past the resemblances of the Knicks and Mets (Metropolitan’s Mishap Mirror Midtown). Yet once again, never has there been this type of ineptitude with such large resources available. Not even in the always controversial Knicks front office.

In fact, clubs such as the Knicks, Los Angeles Clippers, Kansas City Royals, and Cincinnati Bengals, franchises that are often the butt of many jokes, are now looked at with promising futures. Saddled with overpaid players, out-of-touch owners, and of course the Madoff scandal, the Mets, a franchise in the largest market in the United States with a brand-spanking new stadium are now that organization. A mess. The New York Mess.


As a Yankee fan, I’m offering Mets fans a different approach to the Mets future. Why, you may ask? The Mets are that high school rival that you still despise, but have come to find out has fallen on hard times despite their talent. You can’t help but feel sorry. And quite honestly, from my experience as a Knicks fan and seeing where the Mets are headed, no devoted sports fan deserves this from their team.

So let’s jump right into it. It is no secret that next year is going to be brutal. In fact, the term, “unoccupy Citifield” has been used quite frequently amongst the Mets fan base. And with no potential buyer in sight, the long term vision is even murkier. With that said, I have no idea what the current budget is for the franchise, nor do I know what the current plan of attack is for Sandy Alderson. However, the course of righting the ship in my eyes may seem a bit ambitious in patience, but one that I’ve lived through as a fan as well, and that is…

I know, sounds very much similar to the notorious “Summer of 2010” in the NBA, but it is a course that is needed for the Mets.

While unlike basketball, an entire team is needed in order to completely rebuild and will not be a quick one or two player fix. However, the purpose of the plan is not only to restart, but to eliminate the bad contracts that have weighed them down over the years, especially now in their time of severe salary number crunching.
No long-term contracts should be given out as this time, unless well-deserved!

Because the Mets have thrown money at players irresponsibly in hopes of a quick-fix rebuild or for the sole purpose of stealing the spotlight and back pages away from the Yankees, the flawed rosters rolled-over from year to year. A complete restart on the franchise will allow for a complete overhaul of not only the Major League Roster, but will allow much of the Mets prospects, which are in the low-end of the system, to grow into helping the big league club.

I know many Met fans find this to be impatient, but take a look at the Mets current projected financial outlook for the next two years. After doing some research at the trusty (and addicting) www.baseball-reference.com site, the following are my findings: 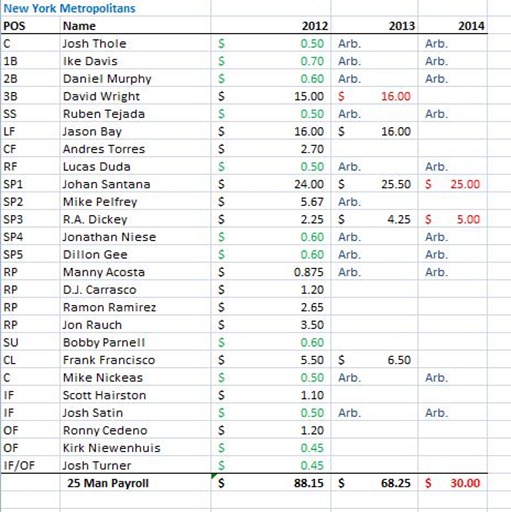 Salaries in red are team options

And yes, the Mets roster currently isn’t complete, but I added Kirk Niewenhuis, who is a tremendous prospect I’ve seen play for Single-A Brooklyn (More on that later), and is ready to help the big league club.

And no I didn’t include Bobby Bonilla’s annual $2M. Sorry, had to get at least one shot in.

And for those of you wondering about Johan Santana, he is immovable. Hoping for any resemblance of the old Cy Young winner is the best you can do. As for Jason Bay, you’re best getting what you can out of him which is hopefully .260/.360/.480 with about 20 HR and 80 RBIs. And for Wright? Well, I’m in favor of keeping Wright, as he is the face of the franchise, however, it may behoove Alderson to move him this July in order to get something in return (See: Reyes, Jose). We’ve seen various deals lately where good-to-great players have been moved for multiple prospects that have helped either replenish a system with young talent, or provide various young major-league-ready talent to fill-in your holes.

Which brings me to the next point, the Mets minor league system. As of right now, according to USAToday, AOLSports, and Baseball America, the Mets have the 27th (out of 30) talented farm system in baseball. Buffalo, their Triple A team is about as baron as a meat locker in a vegetarian’s home. However, the strength of the Mets farm is in the lower levels in St. Lucie and Brooklyn. And as a partial season ticket holder for the Cyclones here in Brooklyn, I can tell you the Mets have plenty of talent on the way up.

Names like Pagan (although no longer with the organization) and Ike Davis were talent I’ve seen in person, and the Mets have multiple others who are on the way up, one of them as mentioned before, being Kirk Niewnhuis. Other names that are heralded within the Mets system are:

Jenrry Meijia – He missed most of the year due to injury, however, during his time in the Majors, Meijia showed flashes of promise. He still remains the Mets top prospect.

Zach Lutz – Was set to debut this past season, but was hurt. Hit .295 with 11 home runs in 61 games, and could possibly make a run at the big league club in spring training.

Jordany Valdespin – Possibly the second baseman of the future for your New York Metropolitans, Valdespin put up some great numbers in Binghampon. .297 BA, 15 HR and 33 SB in 107 Games.

Including some other on the cusp talent of Jeurys Familia, Darin Gorski, and Juan Lagares.

So yes, I know most of these players won’t make it, but even if two are legit big leaguers, 2014 looks like the perfect ETA, considering development and comfortableness.

And if the prospect of a blank financial slate and a wealth of prospects aren’t convincing enough, how about the list of the potential free agents in 2014:
And if the Mets want to hold out one more year until 2015…
Sure, contract extensions, age, injuries, and simple performance decline can diminish both classes, however, the options are there, including the potential of various other names that may become available by way of trade.

The point is, the Mets will not become competitive overnight. Taking a long-term approach to properly correcting this mess is the healthiest way to get the franchise back on track. The last time the Mets had the opportunity to reboot, they acquired Roberto Alomar, Mo Vaughn, Jeromy Burnitz and others in what looked like a team that was great on paper. This time, amongst the midst of other issues, the organization has a chance to put the pieces in place for the next decade. And in my honest opinion, it all starts with 2014.

What? Can’t wait that long?

The only other option is to wait (and hope) for the Wilpons to sell the franchise.

And from that vantage point, 2014 doesn’t seem that long of a wait.

Until then, all I can say Mets fans is follow your mantra…”always believe”, as faith is the only thing you can hang your orange and blue (not black) hats on.

August 16, 2021
3 Up 1. Field of Dreams Game - I shared all of my thoughts on this event earlier this week, but it must be stated again, MLB (especially those who worked on the event directly) deserve sooooooo much props for the flawless event that it was. MLB has something special in this going forward, it's up to them how they decide to proceed.  2. Orion Jean from Texas - The week has been a tough one with so many world issues flooding our news timelines. This story out of Texas is the kind of story we need more of - there are so many people doing GOOD work out there, even ten-year-olds! God Bless you, Orion.  3. AEW Rampage - Another pondering topic this week - pro wrestling is on fire and much of it has to do with the company that has ALL the buzz - AEW. Rampage, their second show debuting this past Friday night, was just a big part of what the industry needs - and from rumors, we're getting even more awesomeness this week.  3 Down 1. Afghanistan - The reports were built all week long
Read more

November 28, 2021
The season is upon us we all begin to reflect on the year, explore our deepest thoughts and feelings of gratitude, and express appreciation for the truer, more meaningful things in life.  I would be lying if I didn't admit that I am so incredibly excited for this holiday season. The combination of wanting the rest from what has been a demanding and exhausting semester (shout out to everyone in Student Affair realms and in Education around the country - hang in there), seeing these holidays through my son's eyes as he now understands and appreciates them, and my experiences over the last few years (losing my dad and the effects of the pandemic), all of it makes for an anticipated Holiday season - Thanksgiving included. I'm not quite sure what it is, or why the sudden feeling, but the need to express gratitude is even more abundant this year in my heart than it is has been. I have tried to remain more mindful over the last couple of months - being more present, spending energ
Read more

September 12, 2021
3 Up 1. September 11th Reflections - The time of the year always brings about a bundle of emotions. This year, the nice round number of 20 brings a milestone of remembrance and reflection. Here is to everyone who shared their thoughts, performed ceremonies, and honored the victims and heroes who should forever deserve it.  Just a quick note, here were some of my thoughts on 20 Years After 9/11 .
Read more
Tweets by @DomePondering