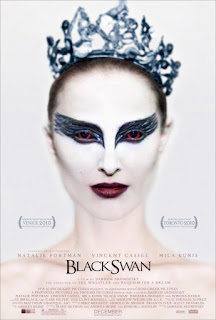 A ballet dancer is perfect in portraying White Swan in her role as Swan Queen, but eventually loses her mind in her attempt to become the Black Swan.

Nina arrives prior to showtime and eventually has a fight with herself, thus releasing her inner darkside and her struggles with the portrayal of the Black Swan.

"I just want to be perfect"

Black Swan is an amazing film in so many ways. The accreditation, Oscar nomination, and public hear-say has been very true - this film is great. The overall plot consisting of battling with two sides of yourself while including the art of ballet is one that is weird, but downright gripping. Quite honestly, a lot of what makes Black Swan remarkable is it's ability to be dark, twisted, and metaphoric.

Adding to the film is the brilliant work of Natalie Portman as Nina Sayers. Her ability to portray the good girl attempting to please everyone before snapping around the issues and pressure that has consumed her is a tragedy that is reflected well, and is one of the best performances you will ever see. Mila Kunis and Vincent Cassel also help the greatness that was Portman in this film with their performances.

Also, a review would not be complete if the unbelievable camera work/shots were not pointed out in this film. Mucho kudos to director, Darren Aronofski on this. As you watch, it will be one of the aspects a viewer will notice that adds to the piece.

Overall, Black Swan is not hype. It is a brilliant movie. Very, very much recommended for everyone.