Red Alert Rumble: Time To Prepare For The Future 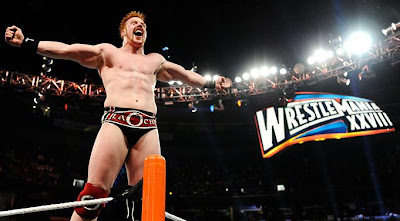 This is the time of the year that is truly intriguing to every wrestling fan, Wrestlemania season. The months leading up to the biggest show in the industry is always filled with surprises, athleticism, and of course, entertainment. That road always begin with one of my favorite events, the Royal Rumble. The actual Royal Rumble match, which is sort of like the company's all-star game, involves the who's who of the WWE along with a few surprising entrants which makes for a great event. Over the years there have been Rumbles that have been very transparent and predictable, while others have been big shockers, yet, they all feature the present, the future, and sometimes, a little bit of the past in the industry. After this past Sunday, the 25th version of the Royal Rumble left me emotionally flat, and very worried about the wrestling industry as a whole.
The Rumble as an event was decent, with the Rumble match providing a shocking winner in Sheamus. However, the actual Rumble match was filled with a lineup that was very bland. As the Rumble progressed into entrants 25-30, you were able to narrow down a possible winner. The lack of stars and developed talent was best represented by the fans who sat on their hands for most of the Rumble as barely-known superstar after rarely-cared-for superstars entered. If that wasn't cause for worry, the Rumble saw a few old timers return, and they received huge ovations. Take a look at the entrant summary below:
Michael Cole? Ladies and gentleman, Michael Cole had a spot in the Royal Rumble!

And this past Monday, we saw the beginning of what could be yet another Undertaker/Triple H match at Wrestlemania.

It's time to pass the torch.

And for some reason, oddly, its not the wrestlers who are afraid to do so, but the companies.

This past October, yours truly had similar concerns over the direction of TNA (Bound For Glory is Bound By The Past). It seemed as if the company had relied on past stars so heavily, that it was jeopardizing the future. In the WWE, it we are seeing the result of years of suppressing young talent, and relying heavily on the usual names to headline and draw for the company.

TNA has since gotten their act together, and has been molding new stars for their future.

For a company like WWE, which seems to churn out superstars through the mighty WWE marketing machine, the time is now more than ever to begin molding the future of their company. Contrary to some belief, the talent is indeed there on the roster. Off the top of my head are talents such as Dolph Ziggler (Who reminds me so much of the late-great Curt "Mr. Perfect" Hennig), Wade Barrett, and Cody Rhodes. Not to mention other talents which are being wasted such as Ted Dibiase Jr. and Kofi Kingston (who apparently has become the new Shelton Benjamin).

It is just up to the company to trust and believe. Of course there will be a minor setback, but the step back is worth the risk to take the multiple steps forward.

If not, we'll be looking at more events like the 2012 Royal Rumble where past stars, well past their prime, are the highlight of the night.