January 20, 2012
Over the past few days, there has been a video on YouTube that has gone “Viral” as they say, and has caused quite a stir amongst many. As of this writing, the video of Jefferson Bethke and his poem, has had over 16 million hits, with response videos in the hundred thousands. The video has also hit mainstream outlets, headlining cnn.com and various other news sites this past week.

After viewing the video twice, I can tell you that I not only love the message, but the poem in which it was delivered by Bethke. I too believe that somehow “religion” and the true grace of God has somehow become disconnected not only within Churches nationwide, but within the secular society. The term religion has now become watered down with negativity, and the true message of Jesus gets wrapped and washed away by those searching, by non-believers, and by atheists. Bethke is on to something here, and should be commended.

I urge all of you DP devotees to join in on the discussion, and take a look. 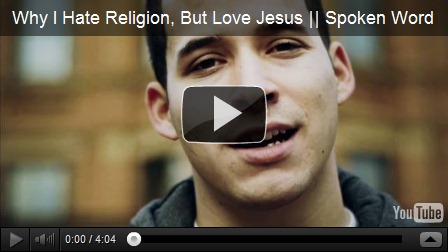