Well here we are! All ready to cap off the 2013 DP All-Star Clash! What does it mean? Absolutely nothing. But it's always fun, and what has been the case since this thing started - it creates lots and lots of debates. In the word's of Bruce Buffer, "It'ssssssssss tiiiiiiiiiiiiiiiiiiiiiiiiiiiiiiiime!" One round and seven topics separate us from naming the 2013 Champion.

But before we do, here are the topics which will decide our champion: 1. T-Shirt Contest (Cooler T-shirt to wear); 2. Better Odds of Career Transformation; 3. Most Likely to Stay Out of the Tabloids; 4. Better Halftime Super Bowl Headliner; 5. Better Wrestling Promo; 6. Most Likely to Be the Next Food Network Star; and if needed, 7. More likely to be a Super Hero.

Here is a review of the brackets on how we got here:

With all of that said...here we go! 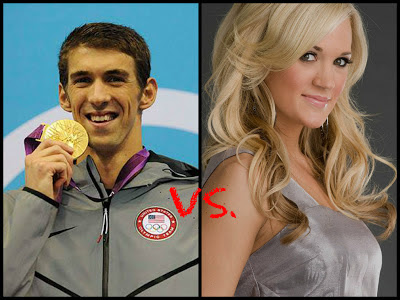 1. T-Shirt Contest - I'm not sure how cool a "Carrie Underwood" T-shirt would be to walk around in. Especially if you were male. But wearing a U.S.A. Michael Phelps shirt isn't any better, but at least it can be misinterpreted for national pride instead of a sad (or creepy) addiction to Carrie Underwood. Country over...well, country. How do you like that play on words? (Phelps 1-0).

2. Better Odds of a Career Transformation - I'm not sure what else Phelps can do now that he is done swimming. Subway commercials? Carrie Underwood can slowly move into acting as it seems she has a hidden talent for it. (Tied 1-1).

3. Most Likely to Stay Out of the Tabloids - Though, both rarely get into trouble, Phelps had his controversial moment being caught on camera at a party doing some controversial things. Underwood is squeeky clean at this point. Plus she's always busy. Idleness is the devil's playground. (Underwood 2-1).

4. Better Halftime SuperBowl Headliner - Wow. This is looking like a complete runaway. Easily Underwood. I wouldn't care to hear Phelps sing, and watching him swim would make for an even weirder halftime. (Underwood 3-1).

5.  Better Wrestling Promo - Always a favorite of mine for obvious reasons. Here is where Phelps gets back into the series as he can easily transition into the usual carbon copy sports statements to either a. downplay a situation, b. excite a situation, or c. leave a situation open ended for more intrigue. All of these or basics in the wrestling promo. Plus, I don't really see Underwood convincing a wrestling audience of anything. (Underwood 3-2).

6. Most Likely to be the Next Food Network Star - The first thought would be to pick the married woman, right? However, it is well known that Phelps consumed almost 4,000 calories during his Olympic training and had a precise diet to do so. A show hosted by Phelps on athletic nutrition and cooking would make for an easy transition. Hey, maybe we should re-do #2?

7. More Likely to be a Super Hero - Ok, the seventh and deciding factor! While a super hero with the power of being a fast swimmer sounds pretty cool at first, it doesn't leave much flexibility for a character. As for Underwood, she's a kick ass rockstar, who is very attractive. There is a great foundation there with much flexibility for an awesome super hero. Especially for that would be quite unique. (Underwood Wins 4-3).