Paula Deen Taking The Fall For The Guilty? 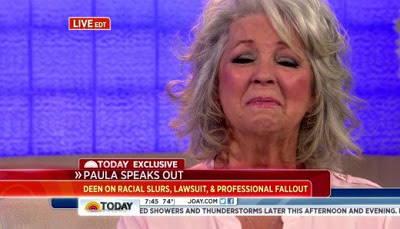 I'm not a huge fan or Paula Deen, nor am I one that is considerably into her recipes for "southern" style dishes. In fact, I've never found anything she's done on the Food Network appealing, and the one time I was forced to embrace her (stuck in the waiting room of a doctor's office while she was the guest on some crappy daytime TV show), I found her to be quite annoying. Just my opinion. But then again, that's the purpose of blogging, so I should say...just bloggin'.

I find the recent downfall of her celebrity and brand to be quite fascinating. Not exactly in a "hey, everyone come look at Paula Deen's life crumble" sort-of-way, but more in a way of perplexing thought. Along the lines of, "Hmmm, the reason she is falling is quite interesting".

If you aren't aware, in a nutshell, Deen admitted to using the "N" word once. This of course, triggered an outbreak which not only saw the Food Network decline to pick up her expiring contract, but several of her sponsors pull their support, her reputation marred, and tons of public backlash accompanying it all.

Now, quite obviously, as a man of color, I'm not fond of the word "nigger". Obviously, it carries various connotations and illicit's many historically derogatory things that is just clearly ignorant in it's use. But I'm sure you know that. At least I hope you do. And quite frankly, I don't use the term "nigga", which I touched on in post way back in 2006 (7 years ago! wow!) about both words (The "N" Word: How a Simple Suffix Separates). However, I don't outright hate the term "Nigga". I get the entire "stripping of power" element behind it's use. We give words power, and by changing the narrative on the meaning, we eliminate it's power.

Nonetheless, I'm not sure why Deen is being shunned in such a way for her admittance. Now, is she racist? I have no idea. I've heard many people use the word before who weren't glaringly discriminating or hateful, and were just simply ignorant. Some used it as uncreative way to hurt someone's feelings. Heck, I've had the word used around me as the only man of color present; used to describe me; and used at me. College can be a cruel way for some people to learn diversity. Especially, those from areas lacking in it. But it happened.

Honestly, Deen seemed to admit to a mistake she made years ago. And quite frankly, for a woman from a southern culture (and generation) that still harbors racism in certain pockets, what do we expect? When "The War" comes up, there are some areas in the south that are not referring to "Iraqi Freedom" or "the War on Terrorism" but the Civil War.

So, yes, the fascination in this story is with us as American's tearing down Paula Deen for her use of the word in the past, when it's still clearly an underlying issue in our society. Once again, the word "nigger" in any type of context cannot be, and should not be condoned. But did she say anything that isn't still an existing problem in our society?

And, if not, then is she the horrific person we are making her out to be, or just a mere guinea pig set to take the pseudo-abuse for the guilt of many, many Americans who have also used the term, "nigger"?

This whole "racism" thing isn't fresh to the ignorant masses the way homosexuality currently is. This has been going on for over a century.

Either way, it seems the root of this problem is more than just a celebrity's mishap. Don't you think?