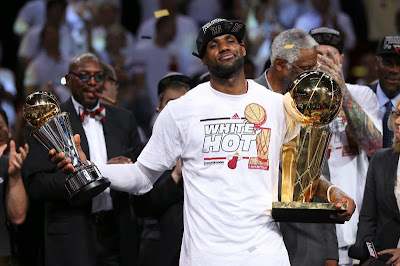 Not one, but now two. Championships for the Miami Heat and LeBron James are no longer a blip in history, but is now looking like a severe impression. I'm not one that likes to get into the long-winded debates you often seen on sports TV about foreshadowing and legacies, because quite frankly, that stuff will eventually play out. It always does. And while we are on it, I very much dislike the new trendy bar of valuing an athlete's ability and worth by how many championships they've won. It's stupid. Very stupid. Teams win championships, not individuals.

Nonetheless, while I type these words, I find myself a bit dejected in the idea of watching yet another Miami Heat championship. I don't hate LeBron James, Dwyane Wade, or even Chris Bosh. In fact, Chris Bosh often doesn't get the praise that he should for the sacrifices he makes and other various efforts gone unnoticed. Some will disagree with that, but I digress...


However, I am dejected at the idea of now being reminded of those painful years of watching the Chicago Bulls reign over everyone. Years in which my Knicks en route for a championship year after year having that door named "Chicago Bulls" slammed in their face. Years of watching the Bulls bandwagon swell to epic proportions, and feeling as if my Knicks had no shot against an immovable force. Years of disliking Bulls "fans", yet years of respecting Michael Jordan.

Those are times that seem to be repeating right now. This new impression in sports history. 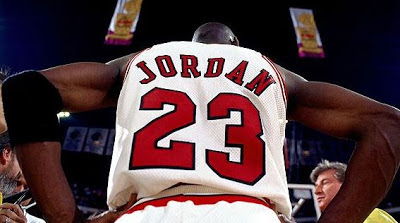 Honestly, I am also super jealous of watching a terrible sports town who were given the gift of a once-in-a-lifetime team treat it as vanity (showing up late, leaving early? C'mon!) while I still struggle with heartbreak in a world of extreme hope and "we'll win it next year" optimism. I'm annoyed with fraudbags, otherwise know as bandwagoners, who suddenly are now "devoted Heat fans" and have suddenly jumped aboard this movement in support of LeBron James in some defensive army against "his haters".

I respect James and enjoy watching him play. But don't kid yourselves now that the Kool-Aid is sweet, James hasn't been this innocent choir boy all along.

Such fans include a security guard at my place of employment who told me that he was a Heat fan, to which I responded, "Yeah? How long have you been a fan?". He unashamedly responded, "Once Kobe and the Lakers stopped winning, I started rooting for the Heat"

And of course, my annoyance is heightened by my new neighbors, who have let the whole seventh floor know of their bandwagoning ways as they react to each Heat moment.

Disgusting and appalling to the Robo household. Very much so.

Finally, it hurts a bit because Tim Duncan is, and remains, one of my favorite players in the NBA. I've always, in a contrarian way, been a fan of the game's "big man." Maybe it's because I grew up liking Patrick Ewing. Or maybe because I've always been rather tall for my age growing up and can somewhat relate. I don't know. Whatever. Either way, watching Duncan try to put his missed bunny into words during the post-game presser was hard to watch. You know...you just know, that Game Six will stay with him forever, and that missed shot in Game 7 will as well. It's quite horrifying to think about.

However, I'm not a total hater. Nor am I Skip Bayless, who is really the equivalent of The Jersey Shore in the Sports world - so outrageous, you feel guilty for even paying attention. I appreciate the season the Miami Heat had, especially, the 27-game streak, the Eastern Conference Finals series, and of course, The NBA Finals. And yes, the efforts of one, LeBron James. 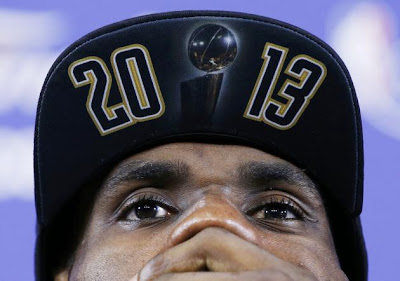 It's scary how good he is, and will continue to become. Especially, after living through the nightmare that was Michael Jordan. But I'm not saying anything here you don't already know. It's really hard to capture what LeBron James means to basketball, and what he means to sports as a whole right now. It really is.

Ultimately, all of these feelings come down to this: I dislike fraudbag fans. I respect LeBron James. However, I will still overwhelmingly root against him, especially when he plays my Knicks.

Sounds too much like my feelings towards MJ, right?