Where Did Everyone Go? Addressing the Yankees Interest Decline 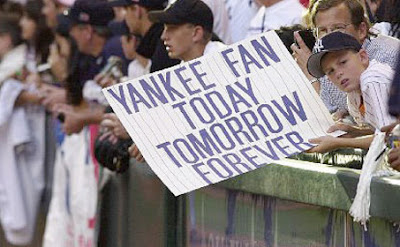 It seems like the bandwagon bubble has burst on the New York Yankees. That's the only sound reasoning I can give on the sudden decline in interest regarding the evil empire. After all, we knew the Yankees had many fans that were simply casual fans of the product. Over the past few years, Yankees fans were made up of die hards, casual fans, and those who only tune in during the playoffs when it's trendy to like the Yankees.

As a Yankee lifer, I've accepted this a long time ago. Quite frankly, in some ways, the recent news of Yankees Stadium attendance being down significantly, as well as the alarming decline in ratings on the YES Network (Down 38%!), has me a bit perplexed. I'm intrigued by the cause, but I will admit a part of me is a bit ridden with guilty pleasure that the frauds are now away from the product.


There have been several articles already written about the reasoning for the decline. Is it due to the lack of stars? Is it due to the recent surge of other New York teams (Knicks, Nets, Rangers, Islanders) who the Yankees never had to compete with since the YES Network's inception? Could it be that some Yankees fans have become spoiled in the success? Or heck, have the Yankees brand fallen behind in-demand to others in the area?

It's pretty hard to pin-point the problem, especially since we are only mid-way through June, and attendance is sure to spike once school is out and the weather is consistently warmer.

Nonetheless, there is a part of me that believes that many of those "casual" or "trendy" fans who aren't devoted to the product have indeed left. Especially, with basketball in this city becoming important again, with two viable options, with one of those being the Nets, who just came off of a recent pop-culture trend of being the "in-thing" to be in support of.

And of course, the Knicks sort of replaced the Yankees in terms of becoming trendy and everyone suddenly planting their orange and blue flag. The same goes for the Rangers and Islanders as well.

The Yankee Stadium attendance really can be summed up in two words - ticket prices. The Yankees have priced themselves out, and at this point are starting to see that, whether they want to admit it or not. We saw it during the playoffs last season, and we've seen it in the way the stadium culture has changed from intimidating building for visiting teams to a corporate social scene.

As for ratings, I find it hard to believe that the absence of guys such as Derek Jeter, Alex Rodriguez, Curtis Granderson and others have affected the ratings this much. Especially, when you could be lead to believe that those who can't afford to attend the stadium would watch the product at home. I'll be the first one to say that some nights the Yankee lineup seems almost like a practical joke, and I'm sure this is especially the case for those Yankee fans who can't remember this franchise having lean years. But the team is still winning! And shouldn't that be enough?

Heck, maybe there is a overall decline in baseball? We all know the Mets aren't helping in keeping up their end of the excitement in this city. Which is unfortunate, because when both teams are doing well, it is something very special to be a part of.

At this point, the only thing that lends itself to a sound explanation is in fact the fraudbags have left and have moved on. Those fans that "liked" the Yankees and simply just wanted to be apart of the winning have moved on.

As a baseball fan first, it's disheartening to see the slow decline in interest for the sport I love so much. However, as a Yankee fan, it brings a joy to my heart that us true Yankee fans can enjoy what has been a season of mortality. Yet one, which we'll all discuss names like Reid Brignac, David Adams, Lyle Overbay, Vernon Wells, and Chris Stewart with disgust, with hope, and with confidence in knowing that we're still here. And won't be going anywhere...unlike others.