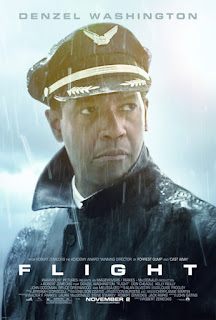 A decorated pilot, Whip Whitaker, lands a flight that was doomed by a malfunctioning airliner and is deemed a hero. However, the investigation and facts after the flight creates many conflicts for the pilot.

After things go wrong, Captain Whitaker awakes from his drunken unconsciousness to save the plane from a nosedive and to an eventual emergency landing in an open field.

Hugh Lang: I'm trying to save your life!
Whip: What life?

Flight is a remarkable movie. The plot, acting, and talent involved in the film is just about as good as the overall message of dealing with issues that consume our lives as well as being able to break those addictions  that keep us from doing such. The mere blend of heroism and personal failure makes for a very interesting dynamic throughout the film.

As always, Denzel is Denzel. Really, at this point you know what you are getting. Kelly Reilly also shined in the film as the recovering drug addict, Nicole, and a personal favorite, John Goodman, provided some comic relief throughout the film.

Flight is a great film that is worth all of the accolades it received last year, including a nominee for best picture.

All in all, a good watch for the intellect and conscious ethical issue that it presents.