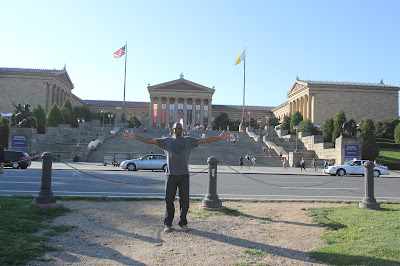 Summers are all about road trips right? So after taking a planned one to Boston (and then to Cape Cod) in late July, the tag team partner and I decided to take a random one on a Saturday morning to Philadelphia. Not as bad of trip since it is only a little under two hours from New York City, but nonetheless, one that offers a distinct difference enough to be called a road trip.

After all, any New Yorker would (arrogantly) tell you, if you leave New York City, you're going to get different. No where - no where - is like New York City.

So we found ourselves headed south on I-95 early in the morning only to be stuck in traffic in New Jersey. Ahhh, New Jersey, you still are a nuisance even if all we're doing is driving through you.

After a slight delay in traffic among tons of college students with loaded cars who were headed back to campus, we broke free and began our descent on the City of Brotherly love, Philadelphia, Pennsylvania.

Now, unlike my trip to Boston, I've been to Philly, and so has the tag team partner. Yet, it's been a very long time since we've both been there. And for me, almost a decade. After finding a pretty economical parking garage ($5 all day parking! Can't beat that!), we made our way around the city. And to be honest, Philadelphia feels very much like New York City at times. Really, there were some streets that felt like we never left Brooklyn. It was a weird version of de ja vu. 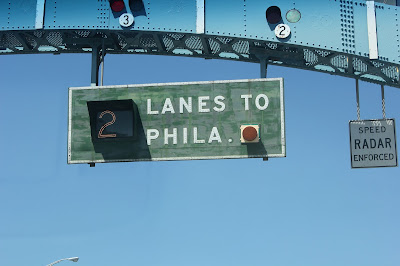 From the mass amounts of people, the cabs, the tourists, the buildings, and down to the begging homeless people, Philadelphia has a specific grit and character that is very urban, but very much theirs. A far cry from the expectations and reality of what I experienced in Boston.

Philadelphia has some pretty remarkable buildings. Their City Hall is quite impressive, to the point where the tag team partner repeatedly claimed, "Their City Hall is better than ours". And of course, in my always NYC-defensive mode, had to tell her to relax. NYC is the best at everything. Just is. Always will be. End of discussion. But seriously though, truthfully, their City Hall was better. Much better.

We then made our way to the famous Reading Terminal Market. This place was awesome. It seems quaint and quiet on the outside, but once you enter, it's filled with shops, stores, eateries, and bakeries. It is overwhelming to a tourist upon entrance, and you sorta just get sucked into the egress of the atmosphere.

Also, much love to the Amish community. We enjoyed a terrific pulled-pork sandwich with potato fries as well as some home-baked chocolate chip cookies that are still being devoured on a nightly basis at our apartment this week. Such good stuff. They are excellent bakers. And of course, very kind people.

Then it was over to the Welcome Center at Philadelphia where we took in some history of the city. Philly, so often associated with the rough and tough image, you forget what a historical city it was during many years of this country's existence. From the colonial days, to the underground railroad, to the civil war days, Philly has tremendous history. The geek in me really enjoyed this part.

And of course, you can't go to Philadelphia with out seeing the Liberty Bell.

Also, you can't do Philly without the Philadelphia Art Museum on the agenda. Well, I'm not sure how many people actually go into the building, but it's pretty much all about running up the same steps like Rocky Balboa. God Bless America. I actually didn't run because it was hot and I had on jeans...and it was hot. I know, I'm a big baby. But I've done it before, so leave me alone. Either way, walk or run, seventy-two steps is seventy-two steps and the view is still awesome on top.

The random trip continued as we made our way over to Citizens Bank Ballpark for a Philles/Diamondbacks game. Awesome place to watch a game, and of course, a mini-story within itself that made this trip even more random (2013 Bucket List - #19 Visit A Baseball Stadium For The First Time).

Finally, on the way back, because the tag team partner and I were so intrigued by Sonic, we took a little detour on the way home and stopped at one in some random town in New Jersey (2013 Bucket List - Eat at Sonic).

We returned back to New York City by midnight, tremendously tired from the day's events. Then it dawned on me that I had to be at work in a few hours.

Random might be exciting, but it isn't always the best idea.