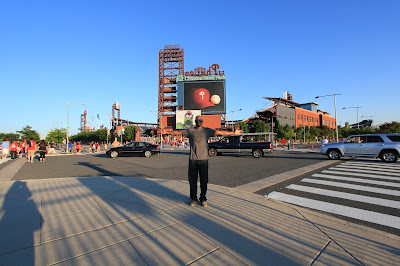 I'll be honest, I was a bit intimidated by what to expect when I went to Citizens Bank Park. I know, this is coming from the guy that suited up in Yankee blue with an interlocking "NY" on his chest and hat and walked around the city of Boston with no shame, and right into Fenway Park with no fear.

But Philadelphia booed Santa Claus. And Philadelphia fans are known to be tough, fearless, and disrespectful. City of brotherly love, huh? Riiiiiiiight. So, like the true coward I was, I wore neutral colors - blue jeans, grey shirt. Didn't even wear my standard Team USA hat that I wear to games that don't involve my New York Yankees. You can't boo the U.S.A. But then again who knows, this was Philadelphia we are talking about.

[Side blog: I find people who wear paraphernalia to a game that does not include such to team to be clowns. Like seriously, are you rooting for that team? Because, you know, they're not playing at THIS game!]

For Phillies/Diamondbacks, I just wanted to enjoy a nice baseball game. National League baseball. And of course, visit another ballpark I've never been to.

Citizens Bank Ballpark is not a stadium you often hear about much. Of course in replacing the old Veterans Coliseum it's not hard to impress, but you rarely hear - at least I didn't - of it being a must-see stadium. 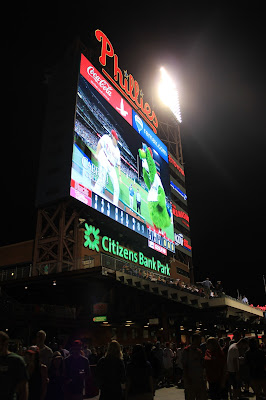 My favorite reason, besides it being in an awesome sports complex along with the Wells Fargo Arena (Sixers/Flyers), Lincoln Financial Field (Eagles), and the tremendous (and super easy) parking it provides, is the design of the ball park.

CBB simply has a cool, sleek design that makes sight lines from any seat easy to view the action. The ballpark has a unique feel that makes it feel small and intimate for even those who are in the upper deck seating.

Also, the seating is quite comfortable with simple enough sections that make existing to the concourse rather easy for any patron. I know, not exactly overwhelming stuff, but it's the little things like this which CBB offers that makes it an enjoyable experience.

I also just loved the idea of the radio broadcast booming with surround sound as you walk along the concourse throughout the stadium. Once again, another small tidbit that goes along way.

Oh yeah, CBB is probably the cleanest park I've ever been in. Seriously, the place was spotless. From the seats, aisles, concourse, surrounding walkways, just about everything, is so clean.

I expected much worse. Philly gets a bad wrap.

As for the environment, I can't really give an authentic review on that aspect as the Phillies are having a tough year. You could tell that they were diehards as they groaned and moaned as the Phillies fell behind rather early (1st inning, actually). The two Phillies' home runs did illicit a strong ovation, so I can only imagine what it's like when the Phillies are good.

Either way, there was no need for me to worry. Despite not wearing the Phillies red, I blended in with all of the other subdued Philadelphia fans.

Nonetheless, my visit to CBB was a rather strange one that I can almost guarantee has never happened to any one of you reading this right now. Check this out: have you ever gone to a game in another city, sat for seven innings of that game, returned home right after leaving (with a brief Sonic stop and tons of traffic) to only get back to your house/apartment and finish - yes, FINISH! - that same game by watching it on your couch?

Well, that's what happened. The tag team partner and I left CBB after the seventh inning with the D-Backs up 7-2. We stopped in Audobon, New Jersey at a Sonic (2013 Bucket List - #32 Eat at Sonic), came to stand still traffic just before a toll both at the Goethels Bridge in Staten Island, turned around from thus toll booth and went another route, drove through Manhattan on a Saturday night, arrived home, and turned on the TV to the MLB Network to find the same Phillies/D-Backs game to be tied 7-7 in the 18th inning.

The tag team partner, well, she went to bed. As for me, you know I sat and finished the game.

Started the game in the building in Philly, finished it on my couch in New York City.

Either way, Citizens Bank Ballpark is definitely a very, very, cool park. Once again, be sure to get out and see it next summer.