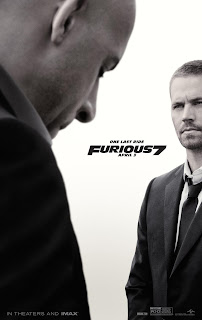 Deckard Shaw seeks revenge on Dominic Torretto and his crew after they placed his brother in a coma.

After locating "Ramsey" on the bus, the crew went back to what they did best, hitting the road in attempting to defeat the security and rescue Ramsey who would then lead them to their prime target of Shaw.

"Dominic Toretto. You don't know me, but you're about to."

This is a tough one for me, but I'm going to be utterly honest, I was disappointed in Furious 7. I really was. Now I completely understand that there are a lot of underlying things that contributed to the awkwardness of this film, obviously the death of Paul Walker, but the film just never clicked for me.

Many called it the "best in the series" but Furious 7 is far from. The cliffhanger with Deckard Shaw in Fast Six left high hopes that carried over into a dreadful plot leading up to a lackluster "street fight" ending between Torretto and Shaw. Also, much of the once comedic moments fell flat for me. Plenty of sighs and eye rolls, which is unusual from such an entertaining series.

However, without being too hard, let's give credit to the production team for a damn fine job. From the super cool scenes that made this film very visually enticing, the screenplay work to rewrite the film after Walker's death, and of course, the miraculous CGI work to save the film, everyone deserves a ton of credit. And the film should be graded on such.

For me, I loved how they tried to tie in Part III (a forgotten and very underrated part of the series), and of course, had moments that felt nostalgic (e.g. Race Wars). Oh, can someone tell me what happened to Leon? Anyone! Did he just quit the group? Anyone!

Ultimately, this film was about Paul Walker, and the closure of his character. The memorial in the end was superb and the highlight of the entire film. Loved the split of the race cars on two different roads - great visual.

Moving forward, I'm glad to hear the final trilogy will be moving towards its roots of racing again as the Bond-esque style of action films has run it's course with this viewer.

All in all, it's definitely worth a watch. Not the best in the series, but certainly, not the worse (that's obviously Part II).