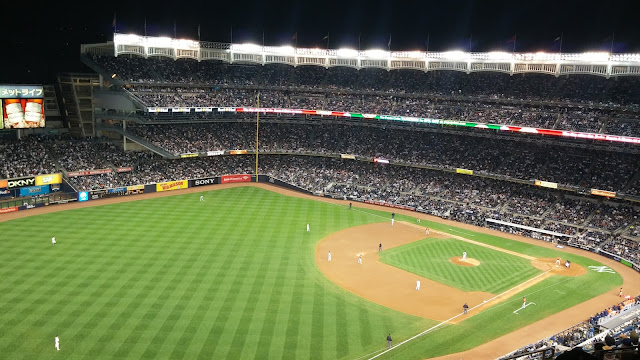 Soooooooo, what has been a fairly enjoyable Yankee season is now all over. Done. Finished. Complete. And ultimately, it all ended in a huge whimpering disappointment.

Last night, there I sat in section 431 of Yankee Stadium and watched inning after inning, after inning, zip by with our offense giving little resistance to Dallas Keuchel (also, my pick for AL Cy Young) stellar performance. Quite frankly, in nine innings of baseball, we never had one base runner get to third base. The hardest hits all night were a Greg Bird liner to centerfield, and a Carlos Beltran smash up the middle. Other than that - silence. Silence!

I'll be lying if I said I'm not writing this with a fallen fandom heart. I'm devastated - it's that same feeling I always have when we are eliminated from the playoffs. A feeling I've missed for the past two years.

Regardless, I'll share with you the same thing I shared with those who I attended the game with tonight - this was in indeed the first playoff team in my lifetime in which I truly did not have high hopes for going forward. It's hard to, especially when you think of how tough the baseball landscape is.

Nonetheless, it still hurts. And as the Mets claim their rightful place as the center of the city (they deserve it, they really do), there is plenty of off-season mourning, anger, and discussion to look forward to.

And plenty that truly need to be addressed.

Here are some other quick tips on tonight's 2015 season finale:

- I know I can be annoying to some of my friends discussing the "old house", especially in comparison to the new Yankee Stadium. I do miss the old place a lot. I miss the structure, the blue-ness of it, the acoustics, the way the upper deck hangs over, and most of all, the way the building shook in certain moments. With that said, I really thought last tonight was a great atmosphere.

It was my first playoff game in the new stadium and plenty of fans brought the energy, but there just wasn't much to feed off of. The loudest the place got was when A-Rod had two on and a chance to really get things going in the 6th. The place was so desperate for something there. So eager, you can almost cut the tension. If A-Rod went yard, the whole place might have come down. But ah well, it just wasn't meant to be.

- I'm a big Girardi guy and I really feel that those who criticize him are typically misinformed or just being ridiculous. Even with a Wild Card loss, Girardi deserves plenty of credit for helping lead this team to where it got to, especially with the injuries and issues facing the team this year.

- I was never a fan of the Jacoby Ellsbury deal when it happened. I'm still not a fan of it. His play down the stretch has been terrible, and his at-bat tonight was putrid. Great athlete, just not worth the price tag. The fact that he sat the bench tonight bothered me.

- I was excited to see Refsnyder and Bird in the lineup. Add Aaron Judge, possibly next year, and the Yankees have some young stars who really can anchor some spots for them moving forward. Houston's lineup is filled with young guys, and so is the rest of MLB. It's time for the Yankees to get younger, and move toward a more dynamic offense besides waiting on the big homerun.

- Speaking of Bird, I am really interested to see how Teixeira's return is handled. There is no way they can send down this kid. None. And of course, as shown by Tex, he's still very valuable.

- Didi Gergorious has been absolutely fantastic this year. The guy replaced Derek Jeter (no easy feat), struggled, bounced back, and is now looking like a solid foundational piece for this squad moving forward. I'm a big fan of Didi. And from the chants and cheers yesterday night, so are a lot of Yankee fans.

- Betances and Miller MUST throw less innings next year. Seriously, their work load was way too high this year.

- How in the world did we allow Chris Carter, a .198 hitter, to reach base three times via walk.?Seriously, HOW?! Make that dude swing the bat! Just another reason we lost tonight.

- Ultimately, Houston was the better team. How many Yankees fans can just admit this? You know, without the ridiculous ranting and raving about firing Cashman, blaming Girardi, and the now annoying "if the boss was alive" rhetoric. Houston was better. Keuchel owned us - again!

Anyway, while my boys are done, I am very much looking forward to Mets/Dodgers (which should be an awesome series), and the rest of the MLB playoffs.

As for my fandom, it now focuses to my New York Red Bulls (waiting on playoffs), my New York Jets (3-1), and oh yeah, the second love in my sports fandom - those damn New York Knicks! Oh boy...

Again, thanks to the 2015 New York Yankees. To sum it up - you were exactly who I thought you were. Sometimes reality and perspective just sucks.