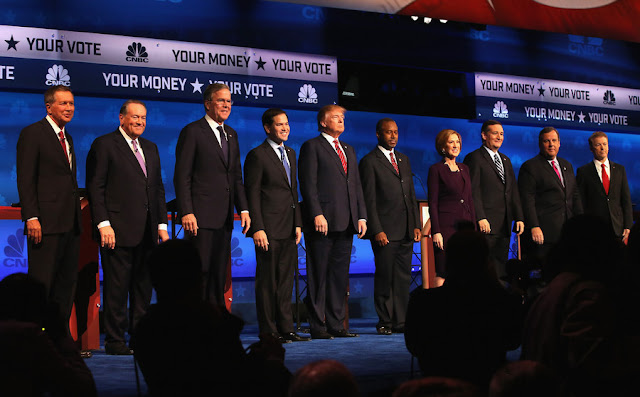 OMG. Yes, It's not often I use silly acronyms that entered the language through our addictive text communication, but that's the only way to describe what happened this past Wednesday in Colorado.

Maybe perhaps, SMH is another.

Regardless, after finally getting around to a much anticipated third round of a highly charged GOP race for the United States Presidency, I sat there watching a debate that was mess. CNBC and anyone who attempted to show their face and play "moderator" in this one, walked away as the biggest loser. Well of course, other than the American people who got nothing out of this debate other than knowing that CNBC is awful.

Nonetheless, let's dive into the weirdest, and probably worst debate I've seen - ever:


- Jumping right in, the CNBC moderaors were awful. Absolutely terrible. There were poorly prepared, were equipped with unbelievably terrible questions, constantly interrupting answers, and just looked like they were there to soak up the spotlight by making the debate about them, their broadcast, and their "talking heads". Well, becareful what you wish for, as that's what they got.

The questions asked by Carl Quintanilla were some of the worst questions I've ever seen in political debates, as well as in my years of collegiate debates. Even random questions from the audience in hybrid format debates had a more substantive approach. Ridiculous.

How about the question on fantasy football? Seriously, bro!? Ugh!

John Harwood needs to check himself. Seriously. Relax, sir. Let the debater answer the question. It's not an interrogation. Kudos to Senator Cruz and Governor Christie on calling them out.

Rick Sanetelli sounded like a guy who just heard a decent question in the bar, walked right to the University of Colorado, walked up to the moderator desk, was handed a mic, and pretty much delivered as such. His question wasn't prepared and he overacted his way through it. It sounded like talk-show radio. Again - awful.

No question, CNBC are the biggest losers tonight. Shame on them. Wasted debate.

Tonight definitely brought attention to the terrific job by Anderson Cooper in the first Democratic Debate.

- One last thing on moderating, since it's not a debate for scoring and you can't penalize the debater, why not just cut the mic of the speaker during their allotted time? Have them know that going in. It would allow for less fluff and more concise responses. Just my idea...

- If anyone was able to get past the "look at us" moderators, there were some small winners in this one, such as Governer Kaisch who as Donald Trump called him out, is barely hanging on in the polls,.Kaisch had some fire in delivering some poignant answers. Most notably was his appeal of the tax plans from everyone on stage. After all, he is right, he is the only one to do it with a realistic plan. Good for coming out swinging. Then again, he needs to.

- Dr. Carson has a subtle, calmness to his delivery that I truly believe appeals to voters. So does Carly Fiorina who finally delivered what I think we've been waiting to hear, a rebuttal to Hilary Clinton's touting of becoming the first female president.

For the record, her response to the "gotcha" question about her time at HP was beautiful. It was obvious she was prepared for it, but regardless, she nailed it.

- OK, is it fair to say Governor Christie and Hillary Clinton are not friends?

- Jeb Bush continues to hurt himself with a lack of fire. In the last two debates, he becomes crushed by the powers that are, or are rising on stage. However, he has been keeping pace by using his personality that is beginning to come through. His response to admitting to trying marijuana in the previous debate, and of course, that awesome response to the dumb fantasy football question, "I'm 7-0 so far in my league. I have Tannehill going this week...". Fantastic! Keep doing you, Bush.

- Can someone, anyone, everyone, please review the last three debates, and start getting Mike Huckabee more involved. He's right, he hasn't been given enough time. Not even close.

- Rand Paul looked so disinterested. Not in a bad way, just in a, "this is awful" kind of way.

- Also, not piling on CNBC here, but it's time to move onto other issues. Where are the social issues, the domestic issues, and others facing the American people? Enough with asking the GOP about war, international affairs, immigration, and the economy! And no, I rather not see them duke it out over who said what. Give me your plan, your vision, and your thoughts. Less attacking of one another. Keep a pure debate going. Is that too much to ask when the top job in the free world is at stake?

- Finally, kudos to the crowd in attendance for turning on the moderator's questions as well. Nothing calls them out more than the boos and jeers from within the building. Especially when the debate is for them, and for all of us watching. That was awesome to see, and it does show people do care. Stop trying to entertain us by forcing moments. Just give us substance and let it happen.

Go away CNBC! I'm done with you.