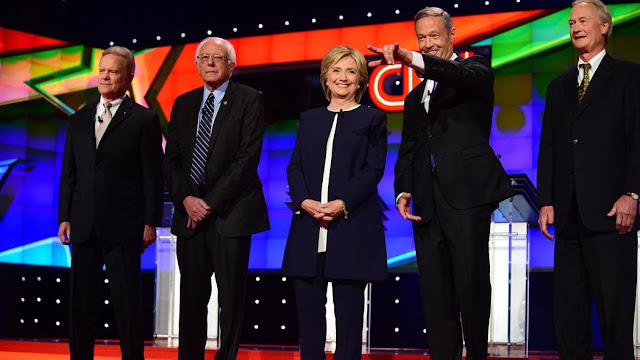 Well, after watching the red guys (and girl) duke it out in what seems like an all out battle royal for the Republican candidacy, it was time to see what was cooking on those coming from the left. The timing was right, especially when the GOP grabbed so much attention via the lightning rod that is Donald Trump.

I felt this first debate for the Dems was indeed vital in introducing America and many new voters to the candidates NOT named Hillary Clinton or Bernie Sanders. Most importantly, after the excitement to vote drummed up by President Obama in his last two elections, the Dems needed to find a way to connect with those same voters who believed in Obama, and who may want to believe in one of these candidates as well.

Quite frankly, this race is for the White House is WIDE open.


Unfortunately, in my opinion, what we ended up getting was an utter disaster. Honestly, this was not a good showing for the Dems as a party, and for a few candidates. The debate as whole, from a pure informative and competitive debate stance was not a good one at all.

With that said, here are some thoughts and takeaways from the first Dem debate:

- I gave props to CNN and Jake Tapper in the second Republican Debate, and I must do the same right from the start for Anderson Cooper. Cooper was poignant, aggressive, and very authoritative in making sure candidates answered questions and didn't shy away from them. Cooper was fantastic, and honestly, was probably the biggest winner of this debate. Sad, I know.

- On the other hand, why was Don Lemon a part of this? I'm not a fan of these networks attempting to squeeze their anchors onto these debates for sheer face time. It doesn't always work, and in the case of Lemon, he very well felt like that forced piece into the puzzle.

- I was a fan of the stated rules which allowed one minute responses and 30 second rebuttals if awarded. There was still the usual over-speaking and ignoring of said rules, but again, kudos to Cooper on keeping the discussion within the debate framework. The Republican Debates very well could have used these guidelines.

Speaking of, wouldn't the better play be to only give the candidates a live mic when they are asked to speak, and then cut the mic when their time is up? How many candidates would then be forced to give quality answers, and not ramble on or offer stock or previously prepared answers?

- I also like the allowance of the two minute opening statements for each candidate. Unfortunately, I wasn't in love with many of them, sans O'Malley and Sanders who were enticing.

- Speaking of O'Malley, in my opinion, he was the winner of the night. Not by an overwhelming margin, or because he out-debated the others, but because he probably gained the most from the night. He was clear, concise, and probably opened the eyes of a few voters.

- O'Malley's biggest strength of the night was in fact the use of pathos in most of his arguments, which were well timed and well executed. From his story on Baltimore, to acknowledging the parents of an Aurora, CO victim who were in attendance, O'Malley gained some major points with well timed emotional arguments.

- Sanders I thought spoke well all night. He has a certain unorthodox charm to his approach that is unlike the typical political cookie-cutter approach we usually see.

- Clinton, of course, is the most charismatic and well spoken candidate of the bunch. However, much like the Republican Debate, she was the center of controversy from her flip flop answer on the question regarding her flip flopping (which I thought was hilarious), to her e-mail situation being investigated by the Feds. In some ways, she has become the Dems Donald Trump.

- Speaking of, you just had to love how the entire panel attempted to cover for her e-mail fiasco. It felt like they wanted to attack it, yet not dwell on it too much for the sake of the party, the whole thing just making for an awkward discussion.

- Also, on a personal note, I find it weird when Clinton plays up potentially being the first woman President. It's a good idea for a debate and for a campaign, especially with women's issues being a main topic of discussion, but it comes across poor when another woman (Carly Fiorina) on the Republican side rarely brings up her gender. Again, just me.

- Lincoln Chafee had the WORST answer (and really, of all three debates thus far)! When asked about voting for a bill he did not know about, he stated, "Glass-Steagall was my very first vote. I'd just arrived, my dad had died in office..." After Cooper pressed by wondering if he voted for a bill he didn't know about, Chafee continued to kill his campaign by crying saying, "I think you're being a little rough."

I think Chafee just killed his campaign with that one.

-  Speaking of rough answers, how bad was Jim Webb's responses to all social concerns? Listening to him squirm his way through those matters were the only thing worst than his constant complaining of not having enough time to speak.

All in all, this Democratic debate was not a good one. It didn't hurt Clinton and Sanders, O'Malley gained some steam from some key moments, but Webb and (especially!) Chafee buried themselves as real candidates to threaten the front runners.

Much of the credibility from all five have been chipped away after and during this one, which really hurt a lot of the content each of them attempted to bring to the table.

Joe Biden, get in there, will you?

I'm hoping for a better debate in November on CBS. Much better.