My Concern For The 2015 New York Mets 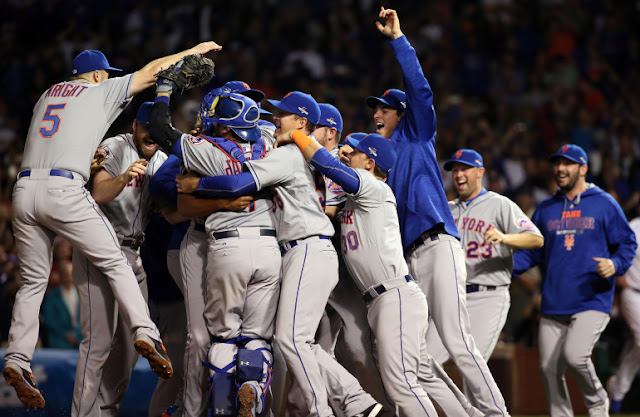 The New York Mets are in the World Series.

Those are words that seem awfully strange and foreign for this Yankees die hard, especially, after the run that I've been fortunate to witness and experience in my thirty years on God's green earth. Nonetheless, I would like to congratulate the Mets, especially, their fanbase on what has been a very fun run.

To be honest, I'm not rooting for the Mets, nor am I rooting against them. It is what it is. They deserve the city's adulation as well as the stage they are about to take.

Quite frankly, the Mets, even before this playoff run were very entertaining. As much as it hurts to admit, they have been playing a more entertaining brand of baseball than my boys have been this year. They have an awesome pitching staff, youth, and a style of baseball that wasn't seen from the pinstripers. But, whatevs. Oddly enough, this was a weird rebuilding year for the Yanks. I'll take that when it comes with a Wild Card berth.


Regardless, what I really wanted to acknowledge are the bandwagon fans. Ahhhh yes, it's been awhile since I've touched base on this topic. As I've gotten older, these people typically don't bother me as much anymore, but lately, I feel for Mets fans. You know, the real ones.

There have been a lot of Mets hats and gear around NYC lately, and plenty of new Mets fans suddenly coming out of no where. Of course, I've seen this already with plenty of fair weather Yankees fans over the years, who I am sure have jumped ship and are now donning orange and blue. I've seen too many supposed fans suddenly claiming to be "New York" fans. They're not as bad as the sudden Cubs fans (these folks need to be ashamed of themselves), but it's still terrible.

I guess I wonder, how in the world do bandwagon fans sleep at night?

I refuse to acknowledge those "fans", but to the real Mets fans who have been there through the VERY, VERY lean years - best of luck starting on Tuesday in the World Series. Enjoy it. It's a great time, and in my opinion, the start of some very exciting years with that young pitching staff to come. Just prepare to deal with the sudden overload on the Mets bandwagon. There will be plenty of new faces aboard, if not already.

Believe me, I've been there, and it's very, very, very annoying.