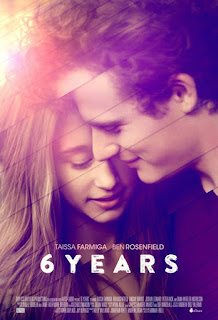 A couple dating for six years and headed into their last years of college now deal with their unraveling relationship as unexpected events disrupt what they always had planned and imagined.

After finally coming to a defining place in their relationship, Melanie asks Ben if he could imagine spending the rest of his life with her. To which Dan could not respond.

I decided to watch this film on the whim after perusing Netflix. I was thoroughly surprised after thirty minutes into the film how much better it was than it's IMDB score. Despite being a very short film at only 1 hour and 25 minutes, 6 Years shines in being a very real and emotional film.

What makes the film so authentic in regards to young love is in fact the characters who are real, and very, very raw. Farmiga and Rosenfield are fantastic in portraying that young naivete from both characters in the relationship. The film also raises an interesting dilemma of life - whether the person we fall in love with as a young person through the toughest times are worthy of the rest of your life, or are they merely holding you back from your potential during those years of supreme self-actualization.

6 Years is a thinker's film, and may not be for everyone. However, if you are into deep and very real characters, give 6 Years a try.