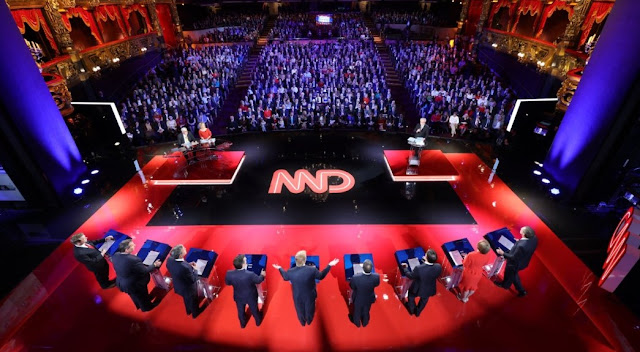 My goodness! I'm not sure if I even want to dive into this one. In what I expected to be a new and reformed debated for candidates and CNN alike, pretty much turned into the same ole, same ole. The very same in what we have been receiving throughout these debates.

Now as a huge debate maniac, nerd, dork, freak - pick your insulting description - I told myself to let a lot of the format issues plaguing these highly anticipated (and oh yeah, very important!) debates go. I was trying to look past it.

From the super ridiculous questions, the ineffective moderators, the poor etiquette, the lack of flow, or the over-abundance of these channels to fit as many of their talking heads into the event, some could say these debates do more harm than good for the candidates, and most importantly, the voters. You know, us. Americans.

Again, these debates shouldn't be for entertainment purposes. But hey, only the highest job in all of the land and the free world is on the line. No biggie.

With that said, I'll jump briefly into these latest round of debates:

- I caught about half an hour of the first debate on my flight back from vacation, and of course, it felt like what many have been calling it, the "JV Squad". I understand the persistence, but it might be time for many of these candidates who are barely hanging on to cut their losses and put their efforts elsewhere.

- Regardless, of course, this debate flowed much nicer than the main event. Less people who follow the format and allow it to dictate the event, produces a quality discussion for all involved. Imagine that?

- Lindsay Graham has really taken these last few debates and run with them, huh? Holding nothing back, including the eye rolls, sarcastic comments, and the oh so interesting and entertaining facials, are all from a man who plans on getting his point across before he falls out of this thing for good.

- Speaking of falling out, why is Governor Pataki still in this race?

- I thought Jeb Bush did a tremendous job. As always, Trump tried to punk him again (which he has done in previous debates), he not only stood up for himself, but he continued to hammer away at the credibility of Trump's plans and solutions for immigration, most specifically his latest in looking to ban all Muslims from coming to America.

Bush as always, was hit with a question regarding his brother, this time in regards to him visiting a mosque after 9/11. Jeb handled it very, very well. I'm not sure how that helps him in polls, but he had a big night in not crumbling as he has in the past to the other major players.

- Speaking of, I might be playing some of my cards on my feelings towards Trump here, but has he followed through with real plans for any issues? A lot of what he says sounds like it's coming from a guy in a bar, not from that of a successful business man. "I would shut down part of the internet. And we will find the best people and use them to do that". Ummm, okay?

- Wolf Blitzer was fine tonight in moderating. He had his moments when he almost lost control, but he held firm and the latest addition of adding a bell helped him. Again, just cut their mic when their time is up!

Also, I don't care for the added panels to ask questions. Lots of poor questions come about from that, and it simply adds the cheesiness that we see on 24 hour tabloid/political news shows, that which I'm sure many Americans don't want in these discussions. The question to Dr. Carson about killing children was absolutely ridiculous. One moderator. Direct questions. Someone get it right for future debates in 2016, please!

- Speaking of Dr. Carson, trying to answer that question by comparing neuro surgery to taking innocent lives and the broader spectrum of having a big picture in war was a very poor response to a poor question. Just a bad look for all involved there. It all just felt really weird.

- I have a hunch Chris Christie has a problem with Hilary Clinton, no?

Seriously, Christie seems like Graham right now, only difference is that he is on the main stage. I guess he is just looking to play spoiler moving forward.

- Marco Rubio took quite the beating as shots for him came from everyone and everywhere. Kudos to him on staying calm and poised to not only offer rebuttals, but defend his choices as well. Not an easy situation.

- Carly Fiorina does a great job of knowing when to pull the "I'm a woman running for president card" doesn't she? And have you noticed how good many of the candidates (sans Trump, of course) have been in not taking the bait?

- I understand that following San Bernardino and Paris, having this debate focused on foreign affairs and domestic safety is needed, but haven't they all felt like this prior? I am very much still waiting on the GOP side of things to delve outside of the same topics they've rambled away and over one another on - war, economy, ISIS, and immigration.

- With both Dem debates being real lackluster, the GOP candidates have had chance after chance to really have some solid debates with a diverse round of healthy topics facing America to create insight for the candidates. To me, the GOP looks like a very fragmented party at times who have on thing in common, they are scared to death of Hillary Clinton becoming President.

To wrap things up on this one, I ran into a Canadian on the beach during my vacation. After small talk of what we do and where we were from, he asked, "Sooo...whose going to win the Presidency? I gotta tell you, from the outside looking in, it looks like a total sh*t show. It's absolutely entertaining for us Canadians."

Can anyone blame him for those comments? Several debates into the road to the White House and it's been a total disaster on both sides.

However, as candidates drop out on both sides, and crunch time ramping up as 2016 approaches, I expect (and hope) we can get better efforts from the candidates and the networks alike.

All in all, this was a decent debate. Some candidates showed strengths on the topic of foreign affairs and immigration, while others attempted to meddle their way through night. I'm not a fan of the one-topic night, but I understand the need.