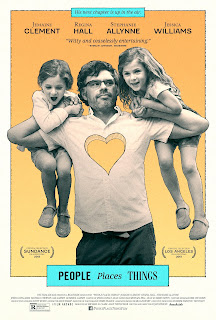 After his wife left him, Will learns to balance taking care of his daughters, finding new love, and letting go of the woman he once loved.

After getting his kids to school on time, Will finds the school to be closed for the day, to which he then goes down a route that changes his life for the future.

"Happiness is not a sustainable condition."

Will Henry: Everything is going to be okay.
Charlie: How do you know?
Will Henry: I don't, but it just helps sometimes to say that.

People Places Things is a charming and witty movie presented with deep characters. Most of all, the film is very real in which a father deals with handling his former love leaving him, all while improving himself for the better to move forward.

From the filming in New York City, which felt genuinely authentic, to the depth of the characters, People Places Things is a great watch. What puts the film over is the work of Jermaine Clement who is very funny with witty and sarcastic lines throughout film.

An interesting and quick watch considering the 1hr and 25 minute run time, I recommend giving this a watch.