Thoughts on Daniel Bryan Retirement - "Glad You're Able to Walk Away" 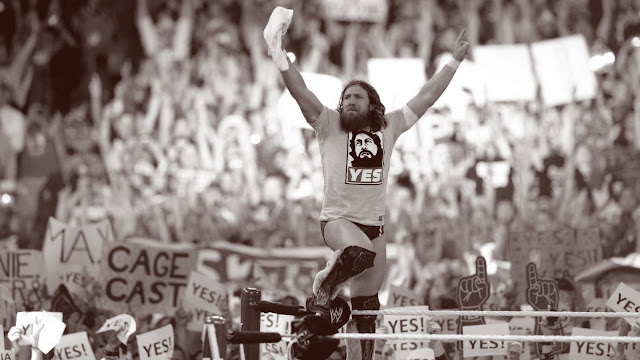 I always have a soft spot for pro wrestlers whenever they decide to call it quits against their will. For any pro wrestling fan, we know the addiction these performers have to the business, and the sheer high that is in hearing the roar of a crowd - no matter the size. Likewise, one has to appreciate the risk and sacrifice these men and women make to merely entertain us for a few hours.

It's for those reasons I always find myself, especially in today's cynical and critical atmosphere of Twitter fingers and microwave reactions, always giving the wrestler the benefit of the doubt over so-called, "creative".

And I'll admit, there is a part of me that gets fired up when I hear or read many criticize and/or over-analyze the physical ability and conditioning of these athletes. Especially, when I know such comments come from a person or persons who aren't exactly physically active to say the least. But I'll digress on this...

Tonight's Daniel Bryan announcement and retirement moment on Monday Night Raw fits right into what I just explained. How can one not feel for Daniel Bryan? I reckon if you didn't feel anything during that segment, it might be time for you to throw in the towel on your wrestling fandom.


However, as Bryan expressed in his heartfelt and in-the-moment speech, this is what is best for him and his family. Bryan used the word "gratitude", and it's something I feel as well during his early retirement. And the only feeling. It's the same emotion I had for Edge, and Steve Austin, and many others who had to swallow their pride after their bodies betrayed them.

After all, the truth is, I've seen too many of my childhood heroes, and too many of the men and women I watched and favored over the years have their lives cut short due to the grueling wrestling business, and more so, it's lifestyle. I dislike having death call the end of their careers. I dislike watching others continue in the ring at older ages for a paycheck. I loathe having to share feelings of gratitude with the overwhelming feeling of, "Damn! He's gone..." Those aren't proper ways to say goodbye. And even if it was early, at least in our plans, we had that moment, that closure, that chance to shut the door on a wonderful career.

Finally, this may sound highly controversial to the WWE-only wrestling fan, as I know there are many of them out there. And quite honestly, that's OK. I would just recommend branching out as there are plenty of good products out there, despite the internet's claim.

Regardless, I always like to play the game similar to the argument we place before Hall of Fame baseball players - which hat will he enter the Hall of Fame with? Quite honestly, if I apply that to Bryan's career, for me, it's easily Ring of Honor.

And of course, I still can't help but want to slam my hand rhythmically on a flat surface whenever Final Countdown is being played.

He was my 2007 Pro Wrestler of Year for his work in ROH well before his WWE stint(s), as well as involved in my favorite match that year (Bryan Danielson vs. Nigel McGuinness - ROH Driven). (Pondy Awards History). Just amazing, amazing stuff. Ahhh, man, memories!

Nonetheless, Danielson err...Bryan - whatever, to me, helped prove that you didn't have to look a certain way in pro wrestling to be considered a top guy, especially over the last ten to fifteen years where we saw this trend - AJ Styles, Samoa Joe, CM Punk, etc... - become the norm.

For that I am grateful. Thanks for helping change this genre of entertainment I'm so addicted to. And of course, thanks for sacrificing so much to entertain a sicko wrestling addict like myself.

Again, in an odd way, I'm glad you're able to walk away from it, and that we were able to say goodbye. All pro wrestling fans should be grateful. YES! YES! YES!