Trade Melo? You. Are. Crazy. 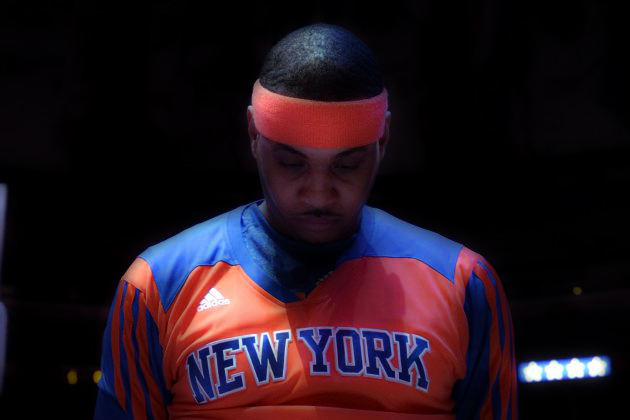 That is exactly how I feel toward the growing contingent who are now looking to somehow wish Carmelo Anthony away in a trade. As if they say enough negative things about his career, or attempt to preconceive his legacy, or throw around allegations about his "will to win", that somehow, someway, in some fashion, Melo waive his no-trade clause and accept a trade of town.

What's even crazier is that these same people believe that their efforts will also bag our New York Knicks the type of package that will instantaneously be fruitful, and will allow the franchise to immediately get where they've been clawing attempting to get to over the past ten to fifteen years - becoming a perennial contender.

"Why don't they trade Melo for a bunch of picks who you can then pair with Porzingis!"

Talk about a huge SMH.


Look, I'm not the biggest Carmelo fan that is out there. This blog alone has evidence of many posts that will prove that. Melo surely has a track record of some seasons where, my self included, you grow frustrated with his play, specifically his ball stopping which kills any attempt of having a viable offense. Also, even more so, is his poor shot selection and tendency to be overly inefficient on offense. I've seen way too many 9 for 28 nights which results in him scoring 28. Good? Bad? Your call.

However, what I do know is this - Carmelo Anthony is the best player on the New York Knicks. Sure, I'm the biggest Prozingis fan on the planet, but Melo is still the guy. Our record without him proves it. Currently, win-less on this very season when he doesn't play.

For me, while his stats and current overall ability doesn't stand behind this coming comment, in my eyes, this is the best season of basketball I've seen from Carmelo Anthony as a New York Knick.

From his leadership off the court (Porzingis' development), to his now trust in others around him, Melo has been a glue - a true franchise guy for the Knicks. You don't trade talent like that away for no reason or because, you know, it's NBA Trade deadline time, and you want a new shiny toy, because the old, once-new-shiny toy is now yesterday's news.

Don't get me started on those looking two to three years down the road regarding Kevin Durant and Russell Westbrook. Please, just stop with that. Just. Stop. While so many fans are chasing the next could-be free agent to come here, the same type of free agent who always spurns the Knicks and doesn't want the pressure and the spotlight of taking on this city's deepening burdens and  demented demons that come with it's pro basketball championship drought, Melo wants to be here. Again - MELO WANTS NEW YORK!

So while I write this, there are reportedly rumors and reports of offers and opportunities for him to go play in Miami, or (finally) join LeBron in Cleveland (Which would be so much fun to watch), some Knicks fans need to put things in perspective. Trading Melo is not the answer going forward. If it happens and its a great deal for our future, then fine. But the answer to the Knicks problems? Come on...

Somewhere, somehow, and at some moment over the years, the smartest fanbase in basketball went from being just that, to a tagline thrown around on sports radio for bravado and pure hyperbole ranting.