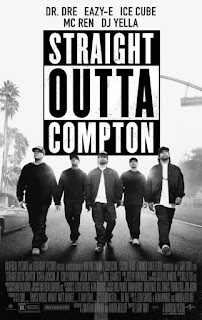 The story of the rise and fall of the N.W.A. group.

After taking their tour to Detroit, the group were warned by lawn enforcement to not play "F--- The Police". Mid-way through the show, the group decides to, which eventually leads to them getting arrested and a riot breaking out.

"Speak a little truth and people lose their minds."

I wasn't sure what to expect when it came to Straight Outta Compton. Many had high regards for it, others told me it wasn't that great. Then of course, there is the whole issue regarding the Oscars.

In my opinion, SOC is an absolutely fantastic film. So well done. So different from other portrayals of rap or hip hop movies based on the artists (see: Notorious, and all of it's terribleness). The film is shot so well, especially it's camera angles and cinematography - it really is a wonder to watch. The addition of real news clips from the past was also a nice touch that added to the authenticity and feel of the film.

As for the talent, everyone involved with casting deserves the highest praise. O'Shea Jackson Jr.'s portrayal of his dad was downright scary. Corey Hawkins was great as Dr. Dre. And finally, of them all, Jason Mitchell stole the movie as Eazy E.

Again, a phenomenal film. How this film wasn't nominated for an Oscar is mind boggling. But then again, is it really?

All in all, a really good film if you were on the fence about SOC.

May 25, 2022
I sit here quite unsure how to celebrate a birthday this year - though, it's not something I've always done. I leave that to my wife and now, my son, to create that spectacle that I'm unable to drum up. However, I've always had some reflection on each year, and each new "age" or trip around the sun completed. Thirty-seven successful trips, and on this day, today, my birthday, I just can't seem to find the words that resonate with how I feel, or simply, to feel.  For starters, there is the idea that forever, my birthday, May 25th, will always be linked with the death of George Floyd. That's heavy enough. And then there is this year, just yesterday, the horrific events of the school shooting in Uvalde, Texas. That is the only thing really at the center of my thoughts, emotions, and concerns. It's challenging to pull myself out to be a focus under the current climate.  But if I tried to mesh the feelings of the current times as well as look inward,
Read more
Tweets by @DomePondering