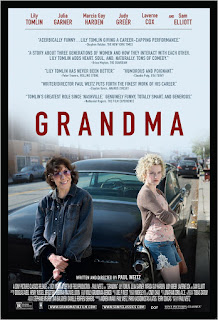 A teenager facing an unplanned pregnancy seeks help from her bold Grandmother who eventually must face some of her past issues in order to help her daughter.

After going to  an establishment that Elle figured used to be an old abortion clinic, now a coffee shop, she throws a tantrum inside of the coffee shop, forcing the manager to throw her out.

"I don't have an anger problem, I have an a--hole problem. I get angry when I have to deal with a--holes."

Grandma is such an interesting movie. On the surface and from the trailer, it looks like a film that uses age and the idea of an "older" character who is bold and full of character for cheap humor and entertainment. However, as the film moves, you learn that the film has a deeper meaning in regards to life and the past we all have.

The character of Elle is fantastic, and quite frankly, Lily Tomlin is tremendous in this role. The character will make you laugh, and at times, feel sorry for her. There are also many other parts of the film that touch on women's issues which may have not connected with me for obvious reasons.

The film is tremendously short at one hour and nineteen minutes, and is a very interesting watch should you find it. Not exactly a bad one, or a great one, but surely a unique film.