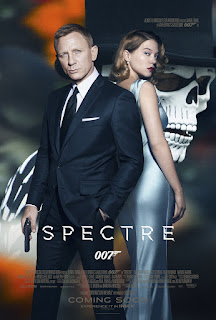 Bond finds himself in a position where he must uncover the depth of the Spectre terrorist organization while M battles political forces to keep the Double-Zero agent service alive.

Bond enters the house where Spectre is headquartered, which eventually leads to him having to perform a daring escape, and a pretty cool car chase.

"The things that bring people together. Out of horror, beauty."

I'm not sure what it is, but I've never been overly a Bond-fanatic. Personally, I felt the films to be a bit overrated. Casino Royale was fantastic, but everything else was just..ehh, OK.

And that's where I stand with Spectre as well. It was probably the best Bond flic since CR,  but even then I wasn't overly blown away in comparison to the hype. Pulling it away from the praise, the film was very good with it's visuals and cool action scenes. A must-have these days in films of it's kind.

Also, Daniel Craig was particularly fantastic in this film, as the character of James Bond developed a certain level of depth not seen before. Yet, for me, the best touch was the plot of this film which wrapped up many of the previous movies into one epic encounter.

My only critique is that the film felt like a film that didn't do enough to make Spectre feel like the mega-problem that it should have been. Especially when Dave Bautista is suddenly in a prominent role, then just vanishes. Or even Bloefield, who seemed to be easily defeated. Just my two cents.

All in all, Spectre is in fact a good movie and is very much worth the watch. Meets the hype? No. But I think that's a problem coming, and created from, diehard Bond fans.