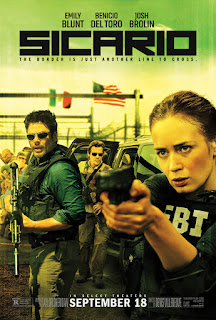 An FBI agent is recruited by a government task force to help aid in the escalating, developing, and unethical war on drugs at the border between the United States and Mexico.

After discovering her purpose for really being recruited and accidentally seeing the truth about Alejandro, Kate returns from the tunnel, punches Graver, before being restrained and told the truth about the entire operation.

"You think the people that send you here are any different? Who do you think we learned from?"

"Nothing will make sense to your American ears, and you will doubt everything that we do, but in the end you will understand."

Sicario was a VERY pleasant surprise. After the early parts of the film which are admittedly slow moving, everything in this film is ties together for an extremely thought-provoking film. Sicario will give you more new amunition on not only how you view the war between drug cartels in Mexico, but how the United States ties in, and the new "rules" of engagement in tackling this problem.

The film really has a super intelligent plot, with many points that makes you wonder and ponder on the ethics regarding the issues at the border, as well as the "war" on drugs. To compliment this were the performances of Emily Blunt and Benicio Del Toro.

All in all, I recommend this film if you are looking for a solid film that is thought-provoking.