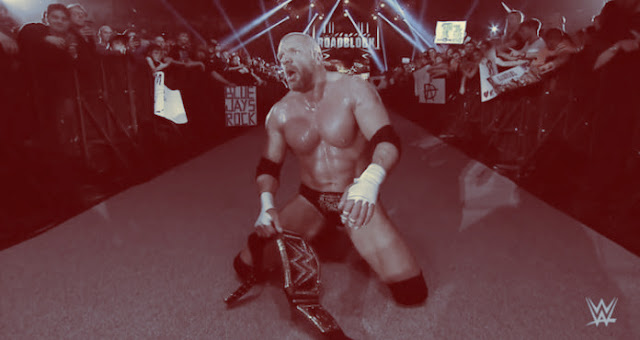 I wasn't at all thrilled the night that Triple H won the Royal Rumble to become the new WWE World Heavyweight Champion. The thought, at the time, of Triple H being in the main event was not one that I was interested in at all. Especially, if it were Triple H vs. Roman Reigns. I actually loathed the idea if I'm being completely honest.

Well, here we are, a couple of weeks out from Wrestlemania, and it is in fact Triple H vs. Roman Reigns at the top of the bill. However, now, I'm not only very intrigued by the match up, it's actually one of the better matches on the still-in-progress card. I tip my cap to you, Vince.

And really, that reason is in fact Triple H's return to the ring. Look, we all know the reputation - the one that is amped up on the internet - like most other things when it comes to pro wrestling along with hardcore wrestling fans who believe they know more than they really do - it carries accusations and memes about him putting himself over and being in the spotlight whenever possible. Sometimes it's fun, other times it's just typical internet wrestling discussion aka. insane hyperbole.


With him taking on more of an executive role in the day-to-day operations of WWE over the past few years, Triple H's days in the ring seemed all but done. And it was quite amazing to see how those who bashed him for his on-screen happenings, suddenly became big fans of his because of the NXT product, which is entirely under his control.

Regardless of that, I've been somewhat of a closet Triple H fan over the years. Not a huge fan, but I do enjoy his work. The guy is solid, and in my opinion, seems like one of those few pro wrestlers that really understands the art form.

Nonetheless, my biggest reasoning for my admiration and respect has always been his presence in the ring. Triple H, in his prime years of the early 2000's, performed some of the best heel work I've seen in my lifetime. However, again, it was his in-ring work that won me over during that time. Triple H has always had an ability and psychology in his matches that just clicked, and created high drama. His matches with Cactus Jack, and especially the Hell in a Cell match at Wrestlemania a few years ago with The Undertaker, remain some of my favorites. Not exactly matches that jump out in text, but left your jaw on the floor when the match was over.

For the WWE, when many of their "go-to" guys were (and still are) on the shelf due to injury, rest, or personal time off, I found it really interesting to see how this Wrestlemania would turn out. When Triple H won the Royal Rumble, let's be honest, it felt like the WWE "going to the well" again. And this time, we all wondered if this one even had water. I know I eye rolled with a slight turn of the head when it was all done. But again, here we are.

I've been absolutely surprised by the physical shape that he is in. At the age of 46, he's still bringing it. For me, that has been the biggest intrigue of all. The idea that we haven't seen Triple H in so long, and the fact that he hasn't fallen off that much is very, very intriguing.

It's obvious his latest programs with Dean Ambrose and Dolph Ziggler were to help get the kinks out and clear off the cob webs before Dallas, Texas and the big event that is Wrestlemania. I have to say, both matches impressed me. He's not 2001 Triple H, but he definitely isn't terrible. It's obvious he moves slower, and there are some things he doesn't do as well, but what is amazing has been the psychology, and the overall ability for him to minimize the weaknesses, and maximize the storytelling within the matches.

Again, like any sport, it's sad to see our favorites get older, yet, it is still so intriguing to catch the glances of their greatness in various moments. I just watched Kurt Angle potentially wrap up a stellar career, so excuse me for feeling nostalgic and overly appreciative. It's time pro wrestling fans turn off the negativity and appreciate Triple H down the stretch of his.

Right now, that's what watching Triple H on this Wrestlemania run encompasses.  Sure, maybe there was a bit of panic involved with lesser star power heading into Wrestlemania. And yes, the storyarc of the "Authority" and Roman Reigns, with the latter finally getting his revenge, is driving the interest for their match within the product. But in the underbelly of all it, it's about seeing what this great in our lifetime, Triple H, really has left, especially on the big stage. That's why I'm watching. And so far, it's been thrilling.