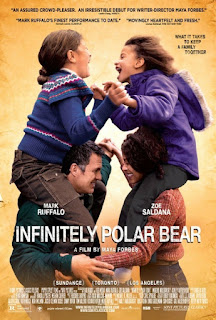 A father dealing with bi-polar disorder attempts to win over his wife and kids by taking on the responsibility of taking care of his kids while she attends graduate school in New York.

Maggie and Amelia finally bring their friends back to the apartment. While they were nervous at first, it ended up being a good time with the kids playing roulette, learning how to make crapes, and playing with machetes.

"They kicked me out of Harvard because the next semester they knew I was delusional because I registered for 75 courses."

Infinitely Polar Bear was surprisingly good. What was an impulse watch, actually turned into an entertaining 88 minutes, and really, wish for more. After all, besides 13 Going on 30, isn't Mark Ruffalo usually pretty good in everything?

And thus he was in this film as well playing the manic depressive Cam Stuart in a role that sheds some humor on the issue, all while letting you into the lives of those who deal with loved ones who suffer from the disease. Ruffalo was fantastic and is very much worth the watch because of his role. Also, so are the kids who were surprising as well.

Another positive are the subtle

All in all, this film was enjoyable, and very much worth the short run time.