A Rose in the Garden: Thoughts on Knicks Acquiring Derrick Rose 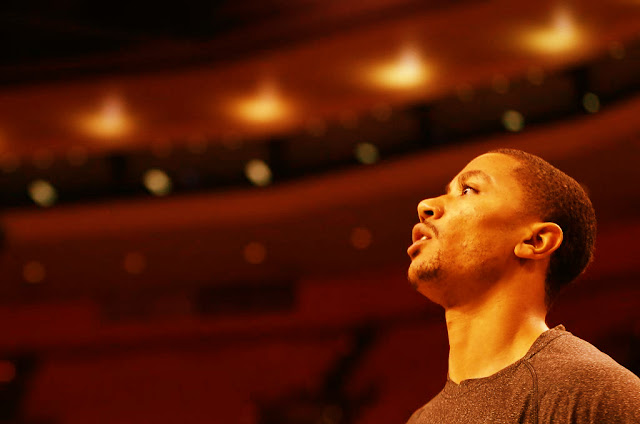 I told you I would use the title. After all, I'm sure everyone else will too. Hey, it's just a good headline.

How many times will "A Rose in the Garden" be used in headlines. Heck, I am using it tonight in thoughts on this. #Knicks
— Dome Pondering (@DomePondering) June 22, 2016

Sooooooooo...it's been awhile since I've punched the keys on my beloved New York Knicks. After watching the city of Cleveland celebrate their latest championship (seriously, think about that, THE CLEVELAND CAVALIERS are NBA Champions?), it leaves fanbases like us thinking - hey, it could happen! Shout out to J.P. from Angels in the Outfield for the lifelong optimism.

Nonetheless, Derrick Rose is now a New York Knickerbocker. And to be quite honest, unlike the previous trades surrounding the Knicks in past years (Andrea Bargnani, anyone? Ugh.), I'm not furious or skeptical. In fact, I find this trade to be a win for the Knicks. Yes, a win for the Knicks!


Of course, most are going to attempt to slam the deal because attempting to be the smartest guy in the room (or on social media) is the en vogue thing these days in sports fandom. Especially, for the fantasy sports enthusiasts. So yes, on the surface, this deal reeks of everything that is so Knicks, especially acquiring a player whose best years are behind him and on top of that, hasn't been healthy.  Amar'e Stoudemire, yeah? That thinking seems to dominate the conversation and the focus on this trade.

But, here is where if you can put aside the "typical Knicks" way of thinking and really get into the basketball move, it's as easy as this being a low risk-high reward move for the organization and the fanbase. They gave up Robin Lopez, a solid big man, Jerian Grant, a guard with potential, and Jose Calderon, whom I don't have to explain how awful his Knicks tenure was. If you didn't see him play, well, he was awful.

They managed to not only get a team to take Jose Calderon and his awful contract, but they also got away from Robin Lopez's deal as well. And while Grant will probably flourish elsewhere, and knowing Knicks karma, he will (see: 2015-16 Cavaliers championship roster), the Knicks acquired a former superstar whose only negative seems to be his health. They also received Justin Holiday, and a second round pick.

Truthfully, the most shocking thing to me in this trade is that we didn't surrender ANOTHER first round pick. Kudos to the Knicks organization on pulling off a trade without doing so. Baby steps, baby steps...

Really, once you get passed the Knicks history, Derrick Rose's history, and the "solid" play of Ro Flo, here is what the trade boils down to: are the Knicks better after this trade? YES. YES. And, YES!

An 80% Derrick Rose is better than ANYTHING we've had in the backcourt since Stephon Marbury ran around the Garden in $15 sneakers and a dumb tattoo on the side of his head. Damn, it has to be rough when your best season was when you were 21 in the league, no?

The worst case scenario is Rose rocking a suit more than the orange and blue this season. Then you know what? You're out from his deal with the cap space to build again! Maybe, Russell Westbrook? Maybe other better pieces? Who cares? It gives you flexibility.

The best case scenario? Rose is motivated by this contract year, the new environment, and the need to prove the doubters wrong, and returns to his old self, or at least a productive version of Rose 2.0 (the post-MVP years) and fits nicely alongside Carmelo Anthony and Kristaps "My favorite NBA player" Porzingis.

What's the most likely scenario? Of course, no one wants to talk in reality anymore, because negativity sells. Everyone knows Rose isn't the same guy who became the youngest MVP in NBA history. Looky here: 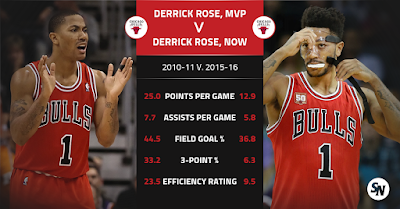 But Rose doesn't have to be. He can be 75% of MVP Derrick Rose and be the guy to help facilitate Anthony, and bring along Porzingis. And 75% Derrick Rose is still better than Raymond Felton, 40 year-old Jason Kidd, another round of Raymond Felton, Pablo Prigioni, and the dreadful Jose Calderon.

In today's world when suddenly four minutes of basketball can dictate the type of extreme narratives we witness (where all of a sudden Steph Curry is suddenly considered overrated and LeBron James an instant folk hero), we forget how often "experts" and talking sports radio heads thought the Bulls to be the sexy pick in the Eastern Conference based upon a yes...healthy Derrick Rose!

I won't even go into the scrutiny laid upon thy Knicks kingdom for picking my boy, Porzingis.

But, let us not forget, this roster isn't complete as of yet. Especially with $30M in cap space and only Derrick Rose, Carmelo Anthony, Kyle O'Quinn, Kristaps Porzingis, and Justin Holiday are guaranteed money for next season. And I wouldn't be surprised if O'Quinn is elsewhere by the end of tomorrow night's draft.

Who knows? There is Willy Hernangomez who the Knicks have stashed over in Europe (Porzingis' former teammate). Maybe that could be a possibility? Maybe we add Joakim Noah? Maybe Dwight Howard? Better yet, please, please no Howard. Yikes. But there are more moves ahead. And I'm excited. The east is very much open, except for you know, LeBron and Co.

So sure, go ahead, get your Knicks jokes in. I get it. But don't tell me this trade is terrible. Or that the Knicks gave up anything worth anything to their future. This is pretty much a gamble. If it works, we got something special. If it doesn't, we start over. Honestly, how is this any different than the last five years?

And because I love me some Tupac, and always relish the opportunity to invoke some of his word mastery into my ponderings on this blog, I'l end with this: