He Did It: Thoughts on LeBron Finally Winning One For Cleveland 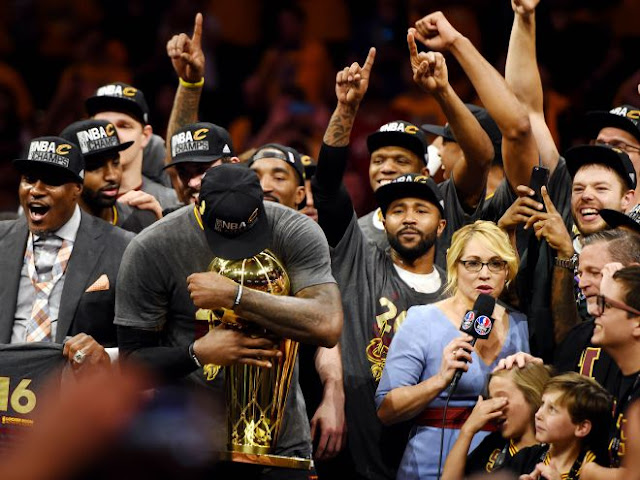 That is pretty much all I can muster as the final seconds ticked down on the 2016 NBA Finals. And quite frankly, after all he has endured, been through, experienced, and overcome, I am truly, truly happy for LeBron James.

After all, how can you not be? Has there EVER been an athlete more scrutinized than James? Hey, even I have had my fair share of things to say about LeBron following "The Decision" (Disappointment: The True Fallout From "The Decision").

Regardless, through it all, LeBron continued to persevere through an age of social media and constant revolving negativity, ignoring the haters, the doubters, and blogging clowns like me, to bring the one thing that as been elusive and let's face it - down right necessary - to the existence of his career - bringing Cleveland a championship.

I am a sucker for stories of such perseverance and adversity. And I too, was a sucker for James' pursuit of this title. Again, how can you not be?

There was also a part of me that loved and empathized with James in discussing his relationship with Tyronn Lue. James touched on his background of being an inner-city black kid who survived, made something of himself, and didn't succumb to the system that easily could have made him a statistic.

Honestly, that gripped me. It really, really did. Because quite frankly, I understand that sentiment and that feeling. Maybe it's a post-thirty reflection sort-of-deal, but I too, like James, am extraordinarily grateful for such opportunities and breaks. And once you can empathize with that, it's really clear to see how much this entire journey was bigger than just basketball for him.

And of course, there is the order of business that took place between those four lines inside the Oracle Arena in Oakland, California. There are no words or reasoning needed to describe the performance of James during this series other than this:

By the way, he lead ALL players in the series in ALL categories.

And oh yeah, he had what is THE greatest block I've EVER seen in my life. No hyperbole. The greatest. Ever. I'm still in awe of that game changing play!

Of course, there are those who went to bed last night sour in regards to the result. Many will still dig deep to find other ways to dislike LeBron. That's cool. That's all fine, and it's their right and their feelings.

Somewhere, right now, someone is working on that King James statue for downtown Cleveland.

Even for this long-suffering Knicks fan, it's a story that makes me believe someday we can enjoy such a time.

Nonetheless, I'm very glad I was able to witness it, and even more thankful I have the opportunity in my lifetime to witness not only Michael Jordan, but also LeBron James. And yeah, I went there in that statement. He's there folks. Deal with it.