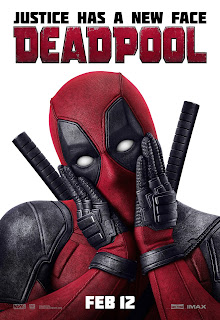 What is it about?
A mercenary stricken with cancer, turns to an alternative rogue experiment that leaves him with the special powers of accelerated healing powers, thus adopting the alter ego of Deadpool.

While chasing fighting off bad guys, Deadpool is left with only 12 bullets to fight off the entire brigade. He begins an interesting and humorous way of counting off the bullets used while escaping the situation. The visual of the bullets are also very cool.

Deadpool is absolutely fantastic. Just a fun, enjoyable, entertaining watch that blends many elements of humor, enticing visuals, and the unique breaking of the fourth wall in several instances. Again, I cannot say enough about how engaged you will be as a viewer of Deadpool.

Of course, there is the hot topic of a "Super Hero" movie being Rated R. I for one will say that I don't necessarily think most films need to be that of an R-rating. It works for Deadpool, and part of that element adds to the specialty of the film.

Ryan Reynolds really was fantastic in the role, a zone of being the overly sarcastic and humorous inidivudal he often pulls off so well. Again, my favorite part of this film is in fact the visual and art of storytelling that is the plot as it bounces from past to present. So well done.

All in all, Deadpool is a very good watch. Certainly very recommended