How I Will Remember Muhammad Ali 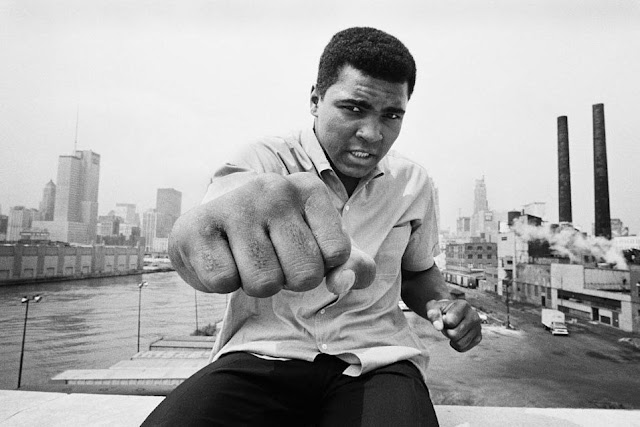 2016 certainly has been rough to humanity in regards to taking away cultural icons. So many who have given us such great moments and impacted our lives in the arts have passed on, and as of this writing, we add the transcending Muhammad Ali to the list.

I am not going to regurgitate much of Ali's accomplishments and impact on history and humanity, as you're well aware of that. Nor will I be dishonest and explain or describe my experience with a life of Ali as a part of it. The truth be told, I am a thirty-one year old man who learned of Ali's greatness through my father's stories, history books, autobiographies, and trusty YouTube.

While I love hearing stories about those legendary fights (the images and photos are so cool, and are still timeless) and all of those battles that make boxing seem like it's best days were in the past, the things that will stay with me from Ali is in fact his presence.

For me, as a fan of pro wrestling and the "art of the promo", Ali's quotes and attitude were just phenomenal. The sayings and comments are priceless, especially coming from his lips, which had the right touch of delivery, and tight walked the fine line of arrogance, confidence, and entertainment. Yet still, that paled in comparison to his legend.

What Ali will always mean to me is his strength and presence. The overall statue of that very confidence he evoked in his one-liners and press conferences. Not necessarily for his work in the ring, however, but for the social justice he stood up for, and the way he was proud to be black, in a time that didn't really allow such a thing. Really, Ali still stands as a pillar of black excellence in this country, and around the world.

Obviously, many are going to focus on his in-ring career during this greatness, and that's well deserved - and quite justified - but it's the moments that Ali made it alright for black men, women, and children to be themselves, and for future people of color to embody that same confidence, is what I'll associated immediately with Ali. His ability to not JUST be a boxing superstar, but by embracing the responsibility and platform he had as a star, and using that to do what was right for civil rights, and for social justice.

I absolutely am enthralled when reading about his decision to evade the United States Army draft in the late 70's. So often this country wraps and dresses various issues in the narrative of "Patriotism". The following is my favorite quote - yes among all the catchy and flashy sayings - from Ali:

Then, of course, there is this:

“Why should they ask me to put on a uniform and go 10,000 miles from home and drop bombs and bullets on Brown people in Vietnam while so-called Negro people in Louisville are treated like dogs and denied simple human rights? No, I’m not going 10,000 miles from home to help murder and burn another poor nation simply to continue the domination of white slave masters of the darker people the world over. This is the day when such evils must come to an end. I have been warned that to take such a stand would cost me millions of dollars. But I have said it once and I will say it again. The real enemy of my people is here. I will not disgrace my religion, my people or myself by becoming a tool to enslave those who are fighting for their own justice, freedom and equality. If I thought the war was going to bring freedom and equality to 22 million of my people they wouldn’t have to draft me, I’d join tomorrow. I have nothing to lose by standing up for my beliefs. So I’ll go to jail, so what? We’ve been in jail for 400 years.”

That's conviction, folks. That's integrity, when it matters. And that's how I'll always remember Ali. Great fighter for sure. An even greater ambassador for black people worldwide, and for social justice of all, everywhere.