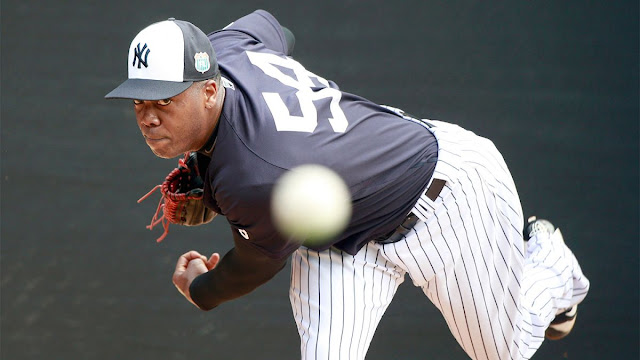 I have to say, the sticker price has me in shock. As someone who loved Mariano Rivera (still my favorite athlete of all-time), I am having a hard time imagining a closer in pinstripes making $17M per year that isn't, you know, Mariano Rivera! But as the saying goes, "that's baseball, Suzyn". And that's baseball, especially in today's market.

Yes, I really did like Andrew Miller more than Chapman. I actually, really, really, really liked Miller! Still do. But, here we are. Needing a closer. And Chapman fits the bill without us losing a draft pick.

Am I concerned? Of course. Anytime your team commits to any star long term, there is that trepidation. Five years is a long time for a reliever, and the last time a reliever got that, it didn't go so well (Remember B.J. Ryan and the Blue Jays?).

More questions come into play such as, will he lose his fastball? How will he age? And of course, what does he have left after the Cubs used him like the rented commodity that they viewed his as?

While those answers are on the table, a part of me remembers that he is indeed Aroldis Chapman. He's not B.J. Ryan, or even Mark Melancon, or Jonathan Papelbon - the other three big time reliever contracts. Chapman is Chapman. The dude is indeed a stud. In fact, I had bleacher seats in the bullpen several times this past season prior to him heading to Wrigleyville, and the dude is an absolute beast.

And honestly, if he loses his fastball, that leaves him at what, 98mph? At the worst 96mph?

So yeah, I'm feeling a bit better. Chapman is back in tow, and you know what? I'm okay with it. I'm okay with Chapman. Betances can now slide back into the set-up role, pitching the eighth, or high leverage situations prior to that, along with Clippard. If we can add one more piece, possibly a lefty (Boone Logan?), I'll be really content about the bullpen for 2017.

Nonetheless, I'm sure this is just the beginning of some more moves this off-season. With the Chapman deal complete, I'm sure, issues like moving Headley and/or Gardner are now on the front burner.