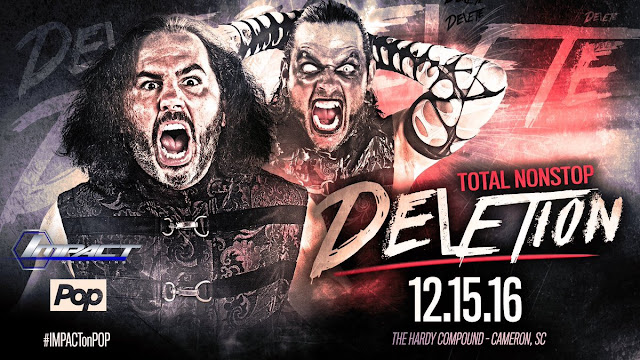 I would really love to sit in on the creative meetings that spur and generate the things like "Final Deletion", "The Great War", and of course, this week's, "Total Nonstop Deletion". After all, much like the first two, this two hour spectacle, a new format to the broken spectacle, produced the same feeling for me - what did I just watch?

And that's not a negative remark, because I did continue to watch, and continued to watch intently, with intrigue, a slight slice of disgust, a dash of embarrassment, wrapped up in an overwhelming feeling of being entertained. This damn broken world can really has that kind of effect on you! Let's be real, I've been watching wrestling for almost thirty years now, and I throughly dig the lake of reincarnation!

just finished #TotalNonstopDeletion.... I have no idea what I watched, but it was entertaining, and at times, pretty funny.
— Dome Pondering (@DomePondering) December 16, 2016

Nonetheless, Total Nonstop Deletion once again has the pro wrestling world buzzing. During a time period in which the company transitions into new ownership and the Holiday season gives them a reason to try different things, we got two hours of broken brilliance. As stated, I'm entirely perplexed from a wholistic standpoint. Regardless, here are some quick thoughts on the show:

- I am a fan of the broken universe. The show really had a unique feel even prior to the whole Tag Team Apacolypto madness. It reminded me of when the NWO hosted Souled Out, or when the Main Event Mafia took over Impact (Remember that?).

TNA has very few things these days they can call a unique concept. Again, during the holidays, I wouldn't mind seeing Total Nonstop Deletion become an annual event. Of course, we need to keep the Hardys around to do so. Anything else, just won't feel the same.

- The fake news pieces added to the show and the overall craziness. It gave the "broken universe" this silly "end of the earth" spoof feel which was insanely goofy, but a good fit. Gilbert Corsey earned himself another role with TNA. Heck, why not keep the gig?

I had to go on first so I wouldn't miss my bed time #TotalNonstopDeletion
— Baby Hardy (@BABYHARDYBRAND) December 16, 2016

- King Freaking Maxel is so over! It's hilarious in how funny the bits with this one year old are. The entrance in the Benz and the delete hand gesture simply adds to the growing lore. By the way, his cover, which included him basically climbing over Spud was fantastic. All hail King Maxel!

Rollin up hot in his Benz @BabyHardyBrand is ready to take on @RockstarSpud in a No Disqualifications match! #TotalNonstopDELETION pic.twitter.com/mCAk4EpMZE
— TNA WRESTLING (@IMPACTWRESTLING) December 16, 2016

- ODB return was an interesting surprise that leads me to other questions about the roster in 2017, but we'll leave that serious wrestling talk for later on. Right now, I want to discuss how for the first time in pro wrestling I watched a referee pull a drone out of the ring to prevent it from making a three count. My goodness, can you imagine how someone like Gorilla Monsoon would have called that?

- Speaking of announcers, this entire event isn't the same without Jeremy Borash on the call. It's amazing how he has survived TNA's revolving management over the years, and continues to possibly be the most vital person in the history of the company. Shouldn't 2017 be the year JB gets inducted?

- Itchweed? Mmmm, not feeling this character. Willow was awesome, and is awesome, but I'm not just feeling this latest creation by Jeff Hardy. The falling asleep from applying a sleeper was a nice touch. There were lots of these little tidbits sprinkled throughout the two hours that really kept things light and entertaining.

- Ok, here goes my first and possibly only "serious" criticism about tonight's show: Lashley vs. Eddie should NOT have been on this show. Their brawl was entertaining, and the spear through the door was fantastic, but I just didn't like the World Title scene being on such a alternative show. Especially, since, in my opinion, Eddie's world title run has been so blah.

- I'm admitting this to all of you - I now hold my hands out ala Matt Hardy and psychotically mimic his "ahhh" sound whenever anyone mentions green beans. Can't help it.

- I'm not familiar with the Bravado Brothers, but I'm guessing they may be around for 2017. I tell you what, they were more entertaining in their appearances for TND than the several months of The Tribunal. Ugh.

- Pro wrestlers shooting fireworks at one another is so strangely intoxicating to watch. Yet, again, so enjoyable.

- I loved the homage to the old scaffold matches in the NWA of leaving Ricky Morton up there. "Descend to the Heavens, you Angel!". Such a great line.

Some other fantastic moments for me were obviously the DCC random man appearance, the referee issuing the five count on a locked door, the "Volcano" explosion, the three count and "Hurricane" appearances, and of course, the mention of, "The man with three H's" and the reference to burying top young talent. Just some really entertaining and golden material.

Of course, not to be outdone by, "You're pregnant?! Wonderful!!!". Damn, Matt Hardy is freaking gold in 2016. His evolution and reinvention from the heel turn, to Big Money Matt, to Broken Matt Hardy has given him the best character in pro wrestling in years.

To wrap up my thoughts, do I want more of this kind of stuff in my pro wrestling diet? Definitely not. It's nice every few months to keep it special, and limited. Tag Team Apocolypto was easily the best thing within the two hours. There were moments prior to that felt a bit rough, especially when you wonder if there were new viewers flipping the channel and came across sillier moments, or even just how the barebones look for the night came off to new viewers.

But again, as much as I had that train of thought, or at times felt embarrassed to even be watching it, I stayed, I watched, and damn it, I was entertained. For the life of me, I can't figure out why? But, that's possibly the broken brilliance at work.

2017 is gearing up for another change for TNA Wrestling. As Anthem takes over the helm, one thing is for sure, this "Broken Birlliance" has a platform. It has an audience. And most of all, it gives TNA something entirely unique that the WWE can not replicate. What more can TNA ask for?