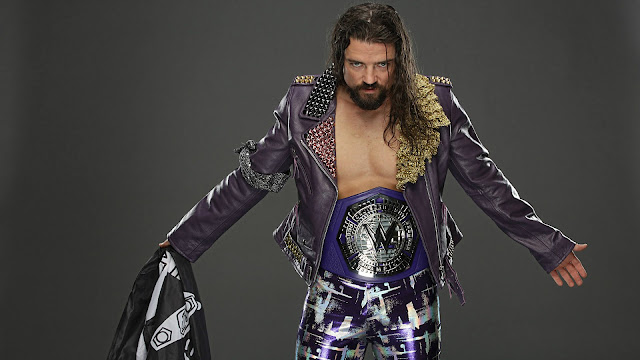 It's odd to use the term "cruiserweight" once again, but hey, the 90's are cool again, right? Or, maybe, just maybe, it's Vince McMahon's continual pursuit for complete and utter pro wrestling dominance? Yup, I'm sure we're both on the same page - the latter reasoning.

Regardless, why not? After all, the WWE has this amazing Network (it really is fantastic) and it's historic library of pro wrestling's past, and quite frankly, how can they not want fresh content to added to it to drive viewers to use it for more than just the past. I'm a fan of the venture.

But really, let's be quite frank, despite the slanted storytelling of the Monday Night Wars that is full of the victors rearranging the narrative, cruiserweights, and that style of pro wrestling has been a void that the WWE hasn't captured quite well - ever.


Think about their attempt with the light heavyweight championship, and the dissolve of the Cruiserweight "brand" when they first acquired WCW. The WWE has never been able to create or produce the buzz and cult-like following such a style is capable of drawing. Despite the occasional exception every few years, as long as McMahon is running the E, the aura of the company is and always will be the land of the giants and the larger than life superstars. Those under 205 lbs and barely scratching six feet don't jive with that unwritten mission statement.

But it doesn't take a genius to realize what the WWE is doing, and can possibly do with the WWE Network. They understand that pro wrestling does indeed have different styles, niches, and fanbases. They've sort of cornered some of that indy-like intrigue with NXT, and now, providing that same platform with their Cruiserweights with 205 Live.

The move also allows them to continue to be the avenue for the top and best talent outside of their kingdom within the industry. They now provide a platform for everything, thus I'm sure, making life incredibly difficult for TNA, ROH, and as we saw earlier this year, even, New Japan, in the scouting department.

For me, this style of wrestling is a favorite. It appeals to me. I love the guys who can move, flip, pull of innovative things, and sometimes, present a match that just flat out looks like chaos and a car crash on my screen.

WCW's version was my first intrigue with this. And with the talented roster they had, how could you not? Then of course, there was TNA and the X-Division, which in my opinion, is the very best this style has EVER been done. So many great names. So innovative. And at the time, they had the division smashing industry boundaries by being on par with the World title. And of course, New Japan also has been carrying the flag on this as well.

I enjoyed parts of the Cruiserweight tournament over the summer, and have been coming around to this latest attempt of WWE to dive into the style. After watching the inaugural show of 205 Live, I had some really quick thought points:

- The WWE production is absolutely fantastic. I'm not in love with the ropes, the belt, or the purple color scheme, but I like the idea of branding the style along with the continued introduction of wrestlers, which is a great start. It's much better than what TNA has fallen into in just placing random multiple-man matches out for audiences with no character development.

- Having the show live after Smackdown already seems like a death knell for the product. It was obvious the crowd who remained were interested in that style, but I'll be surprised if you find that enthusiasm everywhere they tour, and on a weekly basis.

- Corey Graves is the best color commentator in pro wrestling today in my opinion. Great to have him on the call. I would prefer Austin Aries in this division and not wearing a headset.

- This is a concept that is going to take a while, considering the introduction of wrestlers to the fans, and keeping the style fresh on a show of it's own. What makes the style so much fun is in fact the contrast it plays on the card with other styles. The key, as aways, is creating programming that will make it unique. Storylines will be vital for this show.

- TNA once again missed another opportunity (I know, chalk another one up on the board). The X-Division was ripe for a show of it's own, and much like many of their opportunities, they whiffed. It should be interesting to see how their division is branded moving forward when the style is no longer unique to their brand, and possibly, is being presented better (and more clearly) elsewhere.

I should stress, and this is just purely my opinion (I know how fiery pro wrestling fans get), TNA has something special in Trevor Lee, and a pretty good crop of X-Division guys currently on the roster. 2017 really is shaping up to be interesting for TNA.

- Kudos to the WWE for the character diversity in the division. One of the reasons WCW's presentation of this style worked so well was the eclectic group of guys that were in the division. Masked men. Technicians. Daredevils. Malenko. Mysterio. Guerrero. Jericho. Benoit. Psicosis. La Parka. Juventud. Kidman. Silver King! Okay, I'm getting carried away.

But really, though. Typing out a few of those names. Damn, that was an impressive roster!

Still, they all made for a great clash of styles. And it seems the WWE did their homework and pulled the best of the best before making another attempt at this.

- And finally, Rich Swann might just be the first breakthrough guy for the division. The entrance song, along with the charisma, and an average ability on the mic (still far above everyone except for Kendrick) adds up to a huge asset.

- And one more finally, on top of that "finally", how many microaggression statements were made in that match against the Bollywood Boys? Also, touching on mic skills, Gulak and Nese are great in the ring, but that post-match promo? Yikes!

Anyway, with all of that said, I'm looking forward to more from the WWE and their latest foray into this style of pro wrestling. It's not perfect, but it has potential. Needless to say, I think they're doing it right this time. Or at the very least, the best they've ever done it.