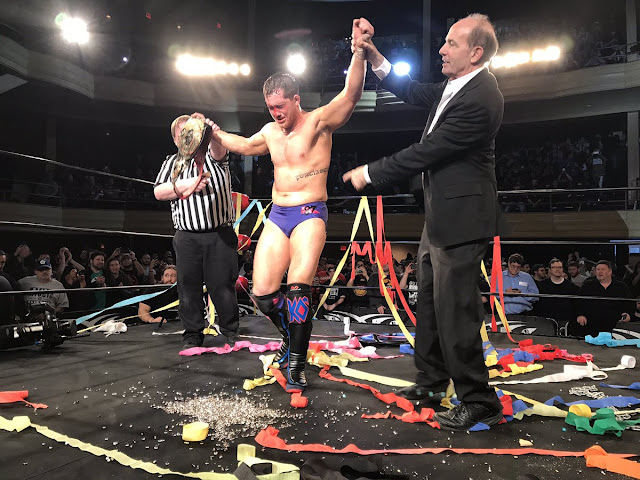 I'll admit, I haven't watched much ROH over the past year. I'm not quite sure if I wasn't interested in the product, or if it's the fact I was spoiled in having their programming offered in the New York City area, then pulled away when Destination America decided to be render itself obsolete (OBSOLETE!) once again after hosting a pretty interesting wrestling lineup. Truth be told, I forgot Destination America even existed until that previous thought.

Nonetheless, Final Battle has always been a great show for ROH, and upon reading some good reviews, I decided to check out the show and jump back into the product. I'm pretty glad I did as not only did I enjoy it, but I truly am invested in the ROH product again.


Here are my quick thoughts on Final Battle 2016:

- ROH's production seemed to have improved greatly since I last invested my time in the product. The set, although really minimal, looks tremendous, and as always, the Hammerstein ballroom makes for an amazing atmosphere doubled with a ruckus New York City crowd. Also, the little things like the sound quality of the entrance music makes a HUGE difference. Adds to the entrances and feel of the wrestlers. Major props to the men and women behind the scenes at ROH. Well done!

- Speaking of crowds, nothing brings energy to a show like the response of the crowd in attendance. Their energy all night really added to the show. Though, there were some really, really, odd moments. First, as we close 2016, us pro wrestling fans really need to retire some tired chants and customs. A lot of it is tired, with some just being downright eye rolling.

The second oddity that stood out was the weird obscene chant towards Cody (more on that in a bit) followed by the chanting of his name when those in attendance had no idea how to feel towards Cody. Awkward stuff. And finally, O'Reilly's win just didn't seem to resonate with the crowd. Felt extremely flat.

- The opening six-man tag was a nice opener. Dijak has the kind of talent that as a fan you know deep down will soon be blossomed in TNA or in NXT. The guy is so talented and so agile for a man his size.

Also, it was nice seeing the Motor City Machine Guns. Sometimes, I wish things worked out when they were in TNA. They were so hot then, and in my eyes, haven't been the same since. Ditto for The Addiction fka Bad Influence.

-  Silas Young has a tremendous gimmick. The look and the style of wrestling/promos really back it up. As for Liger, it's amazing that he's still doing what does.

- Dalton Castle has the best entrance of anyone in pro wrestling outside of the WWE. I just gave props to Silas Young for his gimmick, but Castle continues to foster something incredibly unique in his presentation.

- This might sound weird, especially after reading the reviews of others, but the match between Cody and Jay Lethal stole the show for me. The match, the story told, and the aftermath was so compelling. Cody's turn worked so well as it's easy to fall into the line of thinking that he'll do his run of independents, or even make his way through his "list", all with a happy-go-luck tour feel. The heel turn was awesome, and really gives his feud with Lethal some legs moving forward. Can't wait to see what happens next.

By the way, Jay Lethal might be ROH's best cultivated talent, in terms of wrestlers being the hood ornament of the company. No one I can think of has done it the way he has.

- The six-man tag was great action. Now, I love six-man tags as it simply presents chaos, but did ROH really need six-man titles? I know it's the latest fad in pro wrestling because of how Lucha underground presented their trios, and New Japan then making it a "thing", and that ROH likes to be on that same wave length, but come on.

With that said, I enjoyed the match. The Kingdom felt like a nice fit here for the inaugural titles.

- So, is that the same Marty Scurll from British Boot Camp? Wow. Nice! Good for him. I really, really enjoyed the athleticism in this one. Ospreay is an absolute freak of an athlete, and he reminds me of how I felt as a fan watching a young AJ Styles. And oh yeah, I absolutely love the fact Scurll uses the chicken wing as a finisher! Though, I wish he locked it in the way Backlund did to make it look a bit more devastating. You know, tucking the opponents hand and rolling his own head in a crazed way. OK, maybe that was just Backlund. Maybe I'm just nitpicking.

- Shocker alert! - I still find the Briscoes overrated. I know, I know. I am a Big fan of the dudes in the ring, but I find that their gimmick and promos feel low budget and unrefined, and not in a good way. I just feel like they've never grown at all in this department.

As for the match, this was just nuts. I wasn't crazy about the excessive finisher kickouts, but definitely dug the ending with the multiple super kicks to keep the ROH legends down.

Matt Hardy is the freakin' man! Did you hear that reaction? TNA needs to get out of Orlando, because that crowd isn't doing the broken brilliance any justice. Not sure what this means for TNA/ROH relations, but reading the tea leaves, with Dixie Carter out of the picture, it seems are at the very least, there is a working agreement in place.

- The main event was tremendous, though, I wished they did without the hardcore elements. Truthfully, I wish they would do without the whole "Bullet Club" deal. In my eyes, that's run it's course. Staying on point, both really delivered an entertaining match. As stated above, I was just really taken back by the lack of response for O'Reilly's big win. Probably not a sign for the new champ moving forward.

All in all, ROH delivered a really entertaining event, with the latter matches serving as doing the heavy lifting to raise the status of the show. If the company needs a barometer for the event, the mere fact that I haven't seen their product in over a year and am now interested in checking it out is the most accurate examination of how entertaining this show was. ROH, count me in again.