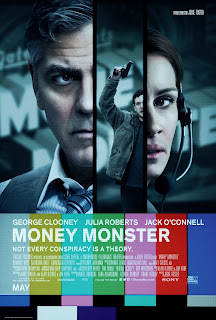 A financial analysis television show is taken hostage by an everyday-worker who helps to expose the hypocrisy and unethical behavior on Wall Street, and how this is magnified in other indirect ways.

Lee, annoyed with Kyle's complaining, attempts to "compare scores". After he gives a synopsis of his life beyond the money, Kyle rebuttals with the problems he's facing because of the lack of money.

"They're only calling it a glitch because nobody understands how the algo works. And if nobody can understand the math, then nobody has to explain the money."

Money Monster definitely was better than I expected, but offered some head scratching moments. It's a good film, with obviously great talent to emphasize the roles, but the substlties of the film are what really bothered me.

Sure, the overall message of greed, lies, and deceit is what should be taken away from the film - or at least I think is what director, Jodie Foster was going for. But at times, it does feel like a conflict of whether that was the message ala "John Q", or if the film was just going for suspense built around finance.

Other factors such as Patty being utterly fearless, which seemed rather odd, and some of the clips of other shows making the hostage situation feel less urgent, and more like some celebrity stunt.

But again, it wasn't all that bad. Money Monster is a decent film that will provide some entertainment. Give Money Monster a try.