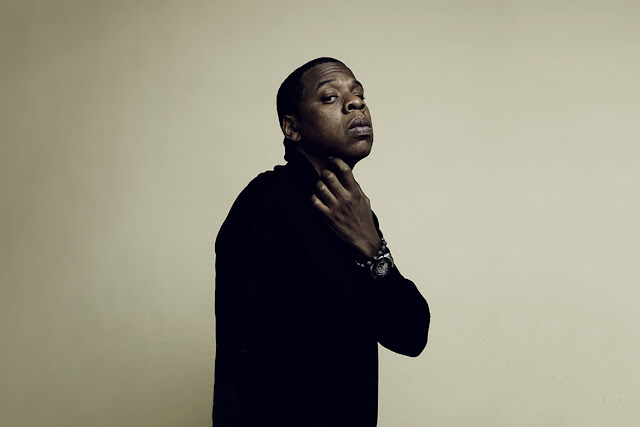 I admit it. At one point, this Brooklyn-born-and-raised guy who narrated his growth to the tunes of one Jay-Z, believed that those days were gone. Over the last two or three albums, I sort of gave up on Jay-z being that voice that I can identify with. That voice that always speaks and holds truth to what I can relate to. Upon growing into a possible billionaire, and rapping about having money and whatever it was, I was one of those fans who decided, you know, will just listen to the hits.

Partly, I was disappointed. He went from reaching in and representing the inner city heart of anyone who understood the words and sounds beyond just the catchy hooks and killer beats of what mainstream (and white) America heard.


He slowly became this "star", this now larger-than-Hollywood being who began expounding on Paris trips with Kanye, and the velvet rope exclusivity he enjoyed with Drake. Jay-Z moved from what was once ours, to an entity known in mainstream culture for what he once was, or perceived to be. In all honesty, at one I point, I truly believed he could've put out any album, and it would do well not because of the substance, but because of the brand - which is how I felt about his last album, Magna Carter-Holy Grail. Blah...it was cool, but, eh.

But that's the extremely delicate balance of fame, the gift of creative intelligence, entreprenuer-ship, and humility.

So yes, I gave up on Jay-Z. His words just never felt authentic anymore. It felt fake and for a quick buck, the way much of hip hop has become, well that which is front and center in the mainstream lens.

And then...my ears grasped to every beat, sound, lyric, and heart bearing word that resonated from his latest 4:44 album, and I found myself once again - hooked, enthralled, mesmerized, and yes, finding a narration for my current life. 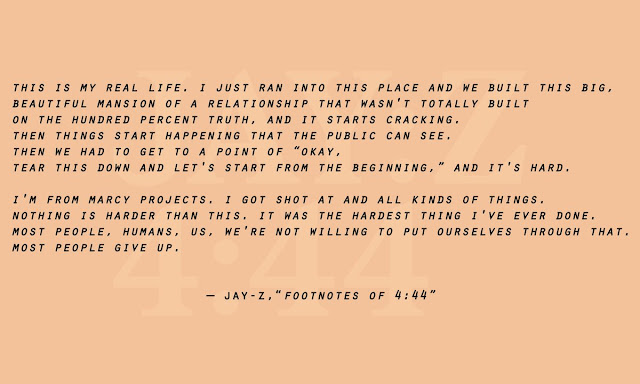 4:44 is dope. It's tremendous. It's actually unbelievable. And if you're a fan of rap and/or hip hop, you probably know that.

You probably also know, if you follow this blog, that I love when music tells a story and is well written. Especially when the lyrics are true, authentic, and heavy. This album came at the right time for me, in so many ways.

For starters, of course, the album is soul bearing, vulnerable, and genuine in the most raw way. From the powerful track which bears the album namesake, 4:44, Jay opens up about his infidelity, his relationship with Beyonce and finding himself in that, and does so in a way that not only makes you admire him for his honesty, but lays an example for men, especially men of color, who are often so conditioned by society to hide their feelings regarding women, that it is alright to deal with these feelings.

Ask any married person, marriage is hard. And we all have our own demons and baggage that further complicates things.

The honesty continues as Jay-Z opens up about his feelings on today's rappers, Kanye West, the family of the late (and great) Prince, and his mother being a lesbian (total shocking reveal). In a weird and unusual way, he also tackles his ego, and pours out to the world his battle with power and fame. "Kill Jay Z" is such an amazing track.

This of course, not to be outdone by his diatribe on black culture, black finances, and overall, his regret on leaving the community, and not investing in Brooklyn.

Especially so because much like many Jay albums before, this one caught me also in a time during a pretty rough summer of personal dilemmas, conflicts, reflections, and stubborn growth.

It also gets me at a time where I too come to grips with much of what surrounds me in my personal life, what has happened to me, and of course, how social justice plays into all of that. Theres been plenty that all feels like too much at times, and not to mention, a big loss I'm still trying to wrap my mind around.

Driving this connection home is my favorite line from this album:

But if everyone's crazy, you're the one that's insane. // Crazy how life works.

Again, it's the line I can identify with tremendously right now - among others. Hooking me in, like he did when I was fifteen.

But really, I am amazed at the growth, and evidence of change in a person that this album expresses can be true - with anyone. And growth, vulnerability, humility, and yes, social justice outlook is the key to this album. Because for the first time in years, Jay-Z acted his age sans the boasting of money, travel, and cars facade - and now we know, emotional misdirection - and gave us the realness we've come to expect that spurs his amazing wordplay and writing ability.

For the first time in years - YEARS! - I'm continuously bumping a Jay-Z album, and not just listening, but thinking, and feeling along with it.