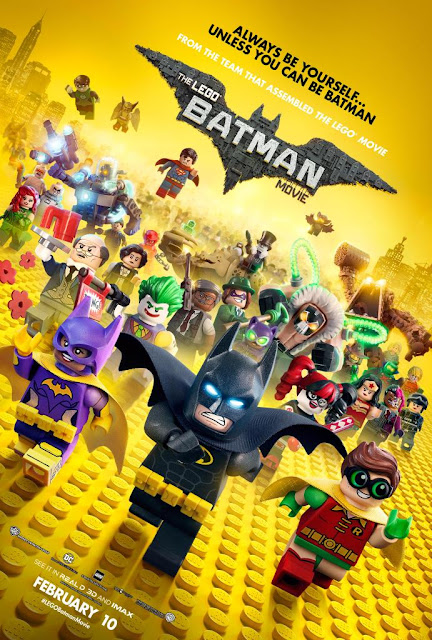 A spin off from the Batman character in the Lego movie, Batman learns to deal with his past and embrace those around him willing to help him.

After accidentally adopting a son, Bruce Wayne attempts to use the eventual Robin to get what he needs. In doing so, Dick Grayson begins going through all of Batman's old stuff and comes up with his own identity and super hero costume.

Robin: My name's Richard Grayson, but all the kids at the orphanage call me Dick.
Batman: Well, children can be cruel.

This film was exactly everything I expected - fun. The film, taking over from LEGO movie in which the Batman character was awesome in, developed an interesting plot around Batman, and of course, kept the character true to the one we all fell for in the original LEGO Movie.

Besides the awesomeness behind everything being LEGOs (still always hard to wrap the mind around), the best part of this film was in fact the humor. It was the same kind of humor that is sharp, witty, but totally acceptable for younger AND adult audiences.

I won't try ruin anything in the film, but go out and watch LEGO Batman. If you liked LEGO Movie, you'll surely enjoy this film as well.