Dome Pondering Movie Review: Between Us (2016) 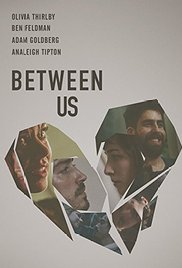 A couple in their sixth year of being together, deals with the pressures of not being married, what they each desire, and the conflict of love, as they realize who they love may not align with what they want out of life.

After pressure from friends, the two just lay at home on their couch shooting down the societal pressures, before both just dancing and singing in a wacky way - something that was just them.

"You wanna be beautiful, but respected as a woman. And then you... you wanna be sexy and skinny but smart and desired and rich and eventually a mother and it's... maybe you just want too much."

Between Us is a very, very interesting and authentic film in pulling out emotion anyone in a relationship has had, or has. The film, though not complex in any way, dives right into the issue of how we each have dreams and desires, and how love can complicate or compromise those feelings.

The characters aren't exactly likable, which in some aspects make it the film that much better in a weird way. They each have their flaws, and are selfish, but ultimately, the film does a good job in showing how what they have together in various ways, is much better than the outward worldly potential they each have.

Between Us is a film not everyone will understand or appreciate, but if you've ever felt this way - even just slightly - it's a film that you buy into.