Not Surprised: Latest Thoughts on Kaepernick 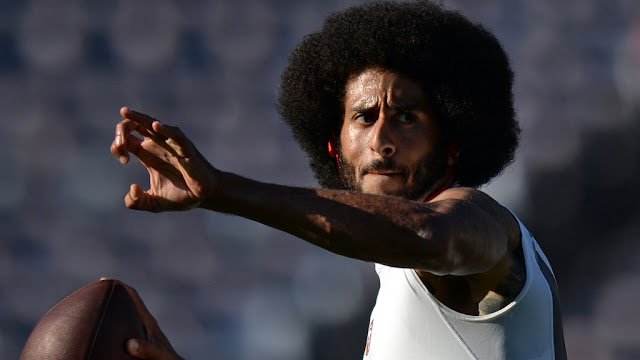 Let's quickly put football aside. As you know, I've given up on watching the NFL, so I'm not sure exactly how well - or terribly - Colin Kaepernik played last season from the eye test. But let's be honest, truly honest, he's not the worst quarterback on the market. In fact, I truly believe that no one thinks he's still looking for work because he can't play.

The Miami Dolphins just fished (pun intended) a quarterback out of retirement, and even tossed around the idea of doing the same for Tim Tebow, who now plays baseball. So there's that.

So yeah, this isn't about football performance. I'm not letting anyone fool me on that one. And neither should you.

And all you have to do is look at the recent newswire to see other players with domestic violence charges, sexual accosting, drug use, and various other offenses, who are receiving second, third, and even, fourth chances! Wasn't Adam "Pacman" Jones suspended, again?!


Nope. Character isn't part of this situation, either.

But yet, somehow the narrative surrounding Kaepernick has become about everything else but the intention of his protest - injustice in America.

And while the irony of his protest has also sent some of that good ol' fashioned "Murica" unfairness his way, it's being rooted in bias, yet covered with just about everything else. And that includes the recent "rally for Kaepernick" promoted by Spike Lee. That too is misguided, and in some ways, a joke as well.

This isn't about getting Kap a job in the NFL. This isn't about owners colluding and the players union not coming to his defense - though those are both shameful acts and incredibly egregious. This is about a man who utilized his freedom of speech, in a sport which can be generalized as America's religion - which thus bothers some even more, and garnered attention doing so in a society that has a history of not wanting to come to grips with it's racial injustice, or even yet, the shortcomings of what America is, to what we like to think and believe it is.

That bothers us. That bothers Americans. Especially, those who are afraid to come to grips with that reality.

How dare he not stand for the anthem!!!

In doing a little research, the same things were said about Rosa Parks when ironically, she refused to stand - and offer her seat to another human being, who society dictated had rights to it based on lighter skin pigmentation. Oh how quickly we forget.

Or how about the names used towards Muhammad Ali when he declined the military draft and wasn't interested in, "going overseas to kill brown people who haven't done anything to me."

Not to mention, there are others who took a knee along with Kap week after week, including Megan Rapinoe for US Soccer, a white woman, who has made various comments about the awareness for equal treatment and action toward racial injustice in this country. 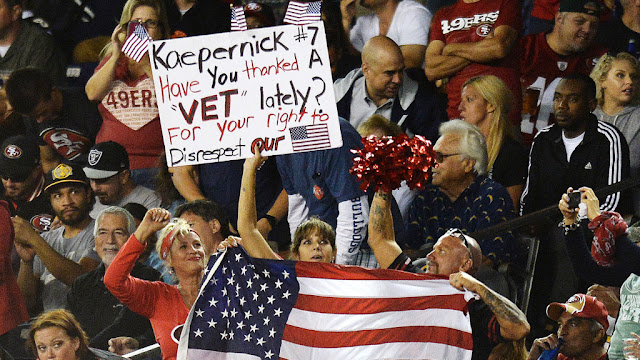 No, this isn't about Patriotism, either. It amazes me how white America likes to twist and believe they set the bar on what "loving this country" requires.

For me, it comes back to a VERY good question Trevor Noah asked Tomi Lahren in an interview a few months ago - how exactly is a black man supposed to protest in America? It's a daunting and scary question that left even the quick-mouthed Lahren stumbling for a retort, because the answers are extremely limited, if not, non-existent. 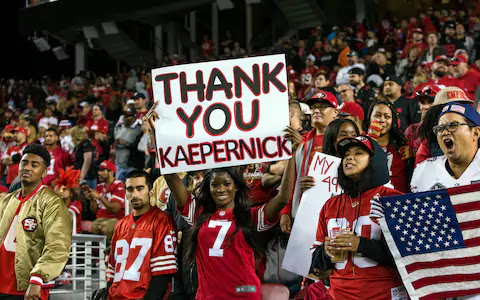 As Kaepernick awaits an opportunity to continue his career, I'm reminded of one of my favorite books, Friday Night Lights, and it's raw and authentic dissection of how sports and our allegiance to it can some times mask racism and bias:

If the season could ever have any salvation, if it could ever make sense again, it would have to come tonight under a flood of stars on the flatiron plains, before thousands of fans who had once anointed him the chosen son but now mostly thought of him as just another nigger.

As I mentioned when this all started - I supported, and still agree with his protest. America is racially unjust. America must deal with it's past. And of course, I want America to heal and deal with this, correctly.

Nonetheless, I am not surprised at all that he is on the outs. We've seen spectacles and side shows in the past in the NFL (see: Plaxico Burress, Tim Tebow, etc...), thus, eliminating the super lame media circus excuse as well.

It's quite a shame.

Because this isn't even about Kap. Somehow, we've come to the point where the focus isn't on black and brown bodies being killed in the streets, of systemic racism and mass incarceration, of stolen land, of equality, or, you know, like GETTING CLEAN WATER FOR FLINT.

Somehow, this has spiraled into football statistics, sports radio hot takes, misguided rallies, a faux infraction of an unwritten rule of Patriotism (for some), and the continued empowerment of the established structure in place that warns - if you go against the system in place, this is what will become of your career (you).

This is after all, America.