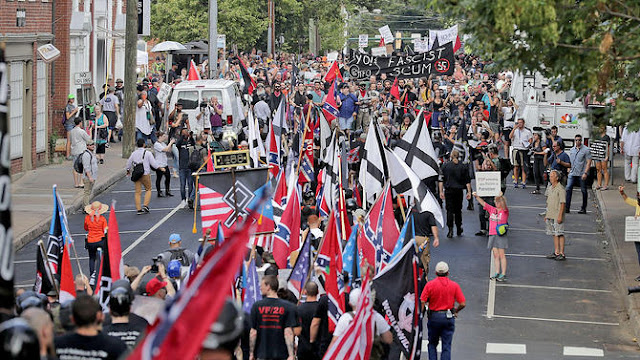 This weekend has been exhausting. Despite the constant systemic injustice that is the United States of America, it's a moment like this weekend that is delivered and must be unpacked and discussed carefully in the pursuit of social justice - justice that is long deserved.

There is plenty wrapped up in everything that is Charlottesville, Virigina. This is deep, spans back to the beginning of this nation, and is a result of current times as well.

I'm still decompressing it all. Here are a few quick thoughts as I too wrap my mind, my emotions, and my intellect and rationale around it:

It's a joke, but for some, it has to be emphasized - no, the election of Barack Obama did not place the United States in a post-racial society. WHAT?! I know, right!

But for real though, it didn't.

Racism is still real. And this kind of stuff hasn't gone away - it's actually been here all along. That is very hard for many people to wrap their minds around. There are many throughout this nation who are genuinely shocked by this.

I shared this quote on my personal Facebook page (Yeah, I've been moved to share some things through that platform as of late - damn this social justice passion - or damn injustice as a whole...):

If Charlottesville is shocking to you, you haven't been paying attention. Or, you're part of the problem.

And quite frankly, that's the truth. Some have been blinded by their white privilege for their entire being, or some just haven't cared - contributing to this problem.

Well...hello! This is what people of color have been saying for years decades centuries! Did you think they were making this up?!

It was very interesting to see #THISISNOTUS trending on Twitter as many proclaimed that the group rallying did not exemplify the voice of white America, and does not represent what the United States is about.

Forgive me, but this part of the entire ordeal is the part that fires me up the most.

First of all, yes, this IS what America is about. This country is built on the very foundation of racism, bigotry, and xenophobia. We're working on it, and we're a country of progress, but please stop with the fairy-dust, patriotic mantra.

Second, there are plenty of white Americans who have perpetuated this culture through inaction over years and years of silence. Yes, SILENCE. Sure, you might not be a alt-right hating bigot, but you surely contribute to a system that oppresses others, and gives survival to such ideologies. Just ask yourself - what have you done to end systemic racism?

And finally, is this not what the Black Lives Matters movement have been attempting to shed light on. Or wait, how about the VERY quote from Colin Kaepernick when he began his protest:

I’m going to continue to stand with the people that are being oppressed. To me this is something that has to change. When there’s significant change and I feel like that flag represents what it’s supposed to represent, this country is representing people the way that it’s supposed to, I’ll stand.

I'm sorry, just like White Nationalists (or whatever new brand they call their hate) can not hoist swastikas and the confederate flag as an act of true "patriotism" for the United States of America, we too cannot dictate a falsehood of what patriotism is and what it includes, until we truly begin holding those very ideals true for all.

We need to begin accepting what is the truth - this is us.

Let's begin dealing with it.

SILENCE MAKES THE MOST NOISE

I'm trying to wish the best for President Trump. I really am. As you can tell from previous posts and my election coverage - not a fan of the guy. But you know what, if he fails, we all do.

However, his response to the situation was probably his biggest failure yet in my opinion. I always believed it, Trump lacks any know-how to deal with social issues. And his inability to call what this was - pick any of the names they are calling themselves - is a flat out a disgrace.

Hypocrisy aside on how he hammered former President Obama for never mentioning the phrase, "Radical Islam", Trump's lack of distancing himself from these groups as they flaunt his name all over their websites and blogs, is downright, and utterly, shameful, and poor.

How a President, in 2017, can not find a way to dismiss and crush such hateful ideologies within our country is the worst kind of leadership - again, my opinion - a leader of a country can have.

Coming off of identifying hypocrisy, how about the refusal or struggle to call this what it very is - terrorism.

For some reason, our society (President included) believes terrorism is only when the suspect is brown and has a Middle-Eastern decent.

And my favorite thing from Twitter touching on this:

I don't get we have to deport hard working immigrants but we get to keep the neo nazi and kkk members. I don't get America #Charolettesville
— Kevin (@kevinfigman) August 13, 2017

WHEN DO LOSERS GETS STATUES?

And finally, this all apparently started over the removal of a General Robert Lee statue in Virginia. I get it's the South and somehow, they still believe they won the war, but come on, man.

When do losers get statues?

Why are continuing to promote and honor racists and bigots in our country? Yes, I'm throwing Thomas Jefferson in there too. Why is this still a thing on the facades of our campuses? On the names of buildings? On state flags? In city halls? On our currency? In our text books?

Why in the world is such an ideology that we, supposedly as a country are not for, still so prevalent in the everyday life in which we live?

An establishment cannot uphold systemic injustice, and attempt to condemn it, simultaneously.

I just hope for those genuinely surprised by this, and for those continuing to fight this lingering beast of hate, that all that happened this weekend in Charlottesville leads to an awakening of fed up Americans who finally come together to eradicate this mindset.

There isn't a place for this ideology - anywhere. Ever.

(By the way, those are the words our President SHOULD have said.)