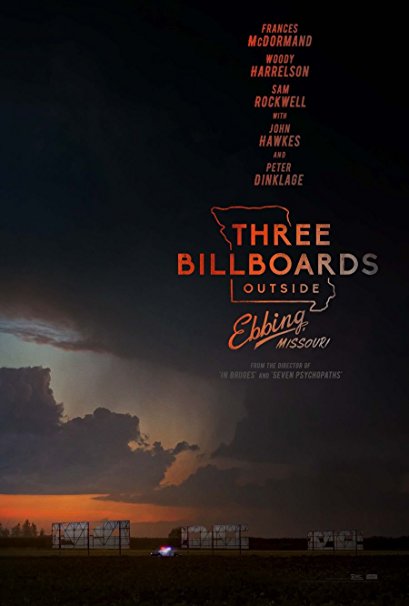 A mother challenges the authorities in town to capture the suspect responsible for her daughter's murder with three controversial billboards that stir up many feelings and a series of events in town.

After the billboards stir up much controversy in town, the local priest stops by to also attempt to use faith to get Mildred to take down the billboards. She then erupts in an awesome monologue comparing the Catholic church and it's authorities to the Crips and Blood gangs.
Favorite Quote:

"All this anger man, it just begets greater anger."

This movie was flat out fantastic. I know, that's already been said many times already, especially in the form of Oscar nominations, awards, and hearsay, but it's all well deserved. From the easy-to-follow-plot which was still so complex and riveting, to the truths about everyday life and bias that still exists in small town USA, Three Billboards was absolutely amazing.

However, my favorite part of this film is in fact the characters involved, and the multi-dimensional layers they each have. At various moments, you're lead to believe a specific character is an antagonist or truly a bad person, then they have a moment of heroism - and vice-versa. The film does an absolutely superb job of getting the message across that people are good and bad, and they are various reasons for both - anger.

And there isn't much to say about the performance of McDormand - rock solid. So, so, so good.

I can't say enough about this film. It was a pleasure to sit back and watch this all unfold.