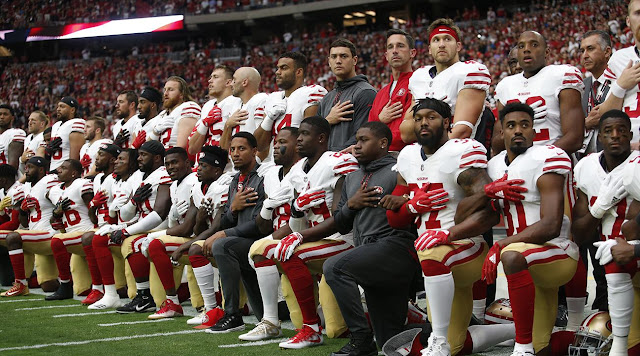 There is a part of me that didn't even want to EVER touch this topic again. I said what I said in the past on the highly controversial topic, and then followed up a year later, and vowed there was no point. After all, no matter how many times issues of clear social injustice is brought up, there will be those who will look to thwart it, especially by draping themselves in a false sense of "patriotism".

But, here we are. Another post on the this entire ordeal. I'm at a point where I simply laugh at callers on sports radio, political pundits on air, or even the casual individual who voices their opinion against the situation - thank you random guy at the gym, your commentary and viewpoints keep my grounded in America's pulse.

And now, the NFL, emboldened it all of it's arrogance, in it's lack of understanding, in it's negligence of player understanding or safety, and yes, it's fear of President Trump and it's supporters has managed to take something so incredibly easy to resolve if it really wanted to, and make it 10x worst.


No matter where you fall on the thoughts on this issue, try on this scenario: The NFL and Roger Goodell goes to the NFLPA and players who are passionate about the protest and say...

We're all suffering on this issue. How can we help you bring light and support the issues you are protesting so we can get back to football?

Yet, here we are with a viable Quarterback blackballed from the sport. The NFL clearly showing their hand where their allegiances and priorities are, and making a new rule that ultimately will make things just as bad. Can't you already see the "who is not out on the field for the anthem" media headlines?

The NFL is the absolute worst league of the four Major North American leagues in handling social issues, and of course, being proactive in these arenas. From the Ray Rice tape debacle, to dealing with CTE developments, to now this, it's clear we're dealing with a league who is more active on changing in-game rules for television purposes than in handling it's players, and the space in society it dwells in.

Quite frankly, the NFL only cares about money. And much like it's owners, will use whatever bodies it needs to in order to keep those revenue streams as high and as frequent as they've always been.

Clearly scared of Trump's backing, the league caved to a ridiculous policy that will only make things worst, and will only alienate others.

However, the jury is still out on how many people will truly turn away from the stadiums and television sets on Sundays. That's what this will come down to - and that is incredibly sad.

Here are a few other thoughts in going with the latest development:

- The NFL is even more of a disgrace than it was before with me. I gave up football not because of this protest situation (news flash, NFL), but because of their sheer negligence towards CTE and head trauma issues. A league that actively tries to block such science to protect their bottom line doesn't deserve support in my opinion. It actually, should be punished in various ways as well.

In this case, the NFL made a rule without even acknowledging it's players. Quite frankly, the narrative speaks volume on how they see players - as a product to make them money. That's it.

- Roger Goodell is the worst commissioner in sports, period. And by the way, he supposedly has public relations experience. Wow...

- And yes, many have said it, some have thought about it, but I would hope to see it. It would be great to see the 70% of black players band together (along with others in support) and sit out Week 1 of the NFL season. What would happen then? Wouldn't that be the ultimate blow back to a league believing they have complete power.

- Why is it so hard for many - especially white Americans - to understand, empathize, and appreciate the different experiences of others in this country? That's a question that continues to come back to me in this whole scenario. I recently heard a caller on a sports radio broadcast mention that "if minorities just followed the rules, we wouldn't be here." Unfortunately, too many people in this country believe this.

The truth is, many people of color, including myself, have much love for this country, despite the obvious un-returns and false representations of "justice" and "democracy" it provides for people like me.

- And for those who still use the tired argument of "rich athletes", ask Sterling Brown what money, education, and fame got him? Tasered by six cops in the parking lot of Walgreens.

- Who makes the rules on what "patriotism" looks like? Again, I'm no fan of the President, but his words stating that players who don't stand for the anthem"shouldn't be in the country" is rather jarring. Somehow, we've become a country set on these dumb - yes dumb! - rituals cloaked in hypocrisy and ties to slavery, that we've approached  the area of confusing nationalism with patriotism.

- In a league where the United States Military PAYS the NFL for it's presence, and yes - more people are on line buying beer and food than "standing" for the anthem, or having a flag parallel to the ground (against U.S. flag code), it's hard to say what's constitutes patriotism under this garbage argument of "disrespecting the country".

- I strongly believe part of what really drives this entire ordeal is that football - the actual, living, religion of football, and the entirety in how it's woven into the fabric of Americana" - is disrupted at this point in history. There are many who cannot separate America from football, thus, it is a true hinderance to see something so religious, so American, now be torn apart. There are many who fear that this will no longer be there, especially if the presence of black athletes are not a part of it, or future children being geared away from it. It's surely an uncomfortableness for many Americans, and one that many feel as the destruction of American values itself.

For many, it's "NOT FOOTBALL - no, not football. Protest somewhere else." And that's the beauty in this entire situation from a social justice historical point. Kaepernick used a platform than not only destroyed his career, but ultimately, brought the utter most disruption - aka protest - to the status that needs to be changed.

How about lengths we have gone to in order to not have to address to clear issue raised by Kaepernick from the very beginning. Rather than discuss police brutality and inequality even as they continue), we've gone down this ridiculous road of anthem observing and everything else to not discuss the issue. But that's America.

- Much like years turned Muhammad Ali and Jackie Robinson into eventual heroes (simply go back and read headlines on both from newspapers and articles), I do believe time will do the same for Kaepernick.

Speaking of Jackie Robinson, here is what the great said regarding the National Anthem in his Autobiography, I Never Made It:

I cannot stand and sing the anthem. I cannot salute the flag; I know that I am a black man in a white world.