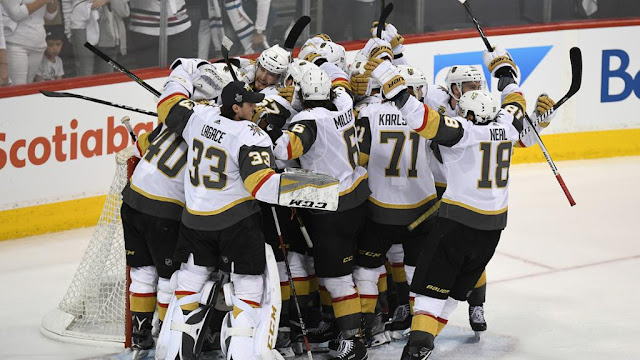 1. JJ Watt - Watt is just a stand-up guy. No other way to say it. An athlete that embraces the city he plays in, in times of good, and when he is needed. Paying for the funerals of all of the victims in the latest school shooting is just another example of the kind of dude Watt really is. So much props.

2. Sante Fe Admins - So many times in these shootings, the efforts and bravery of the many who help to keep students safe, calm, and diffuse the situation often goes without praise and notice. Once again, much love and praise to those who did so once again. And yes, to those who lost their lives doing so as well.

3. Las Vegas Golden Knights - In their inaugural season, the Golden Knights are in the Stanley Cup Finals, and quite frankly, could possibly win the whole damn thing. It's so impressive, and speaks to the parity of the NHL. But really, if you're a fan of a team currently in a drought (say, like my New York Knicks?), this run is absolutely remarkable.

1. Sante Fe School Shooting - Anyone else tired of this shit? Like, seriously.

2. Israel/Palestine Unrest - Speaking of being tired, historical unrest in the Gaza strip is once again a main focus, and it's once again sparked by the United States and our government.

3. Government Reps - Nothing has been more disappointing in the comments and rhetoric being made by Texas state officials and even our President following yet another school shooting. The suggestions for more teachers with guns, different "layouts" and even Ted Cruz's insanely staged speech on the day of, were just more of the same - talk, no action.