Making Sense of The Bible, Politics, and Immigration 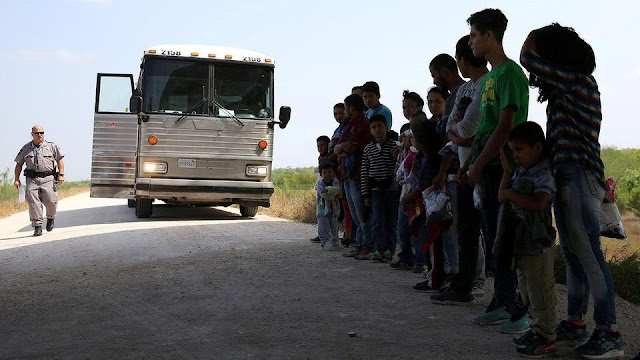 They use the Bible.

For any Christian, or any person that believes in the Good Book and trusts in Jesus for faith, for life, for eternity, it always is a point of contention, a source of struggle, and a subject that truly tears the heart apart - using the Bible to justify action. And in this case, specifically cruel and inhumane action.

By that statement, you already know where I stand. And if you read and follow this blog, you already know where I did. Yet, after Jeff Sessions used Romans 13:1 as a means to justify the removal of immigrant children from their parents at the Southern Border, as a Christian, as someone who believes heavily in that book and in the faith of Christ, I'm left utterly appalled, angry, upset, and disappointed.

Shockingly enough, much like what was promised in "Making America Great Again", we are seeing this country reverse into some dark times and questionable actions that reflect those specific times. Times that may have been great for any white male Americans who believe those "times" were this country's "best".

But here is why this is so appalling for me (and maybe even for you reading this). Jeff Sessions, already questionable in credibility among recent events (I'll let you decide), proclaimed and touted the scripture as if he had final say on the matter. The kind of final say that came across as using it as a weapon or reasoning for the action rather than truly using it as justification for God's work.

Well, it's the sort of action that reminds me of slavery, and how masters and slave owners would use that SAME exact verse to justify it's existence, justify the beatings, and justify that way of life. It's so reminiscent of how this faith was bastardized and pillaged to uphold slavery and to soften the blow of guilt, moral capacity, and the probable overwhelming weight on the conscience. This is devine - it's in the Bible. This is how it's supposed to be. Fall in line!

I'm left upset, because I know what this faith is. I know that it is fact. That it is real, and it does transform lives closer to a higher being - God. But having to watch your faith become used for evil, used to progress and uphold systems put in place on the same "devine" reasoning, or really, fallacy, is cause for remorse.

As the Good Book is continued to be used as such, the less power it holds within our society. We're already seeing signs of that. It's frustrating because in many ways religious freedom and some of the Christian values that were once tentpoles of our governing structure and society have been eroded, and we - being Christians - tend to want to blame "the left", "the liberals", "technology", or just about everything else except for our us. A lot of this is the lack of true Christian loving.

We hang our political hats (maybe your MAGA hat) on topical societal classic conundrums like abortion, same-sex marriages, gender identity among some of the many, rallying like the same hate mongers and angry people we think we're standing up against. Yes, My Jesus did overthrow tables. But he also called in with love. That's not present here in our society today, and it hasn't been in a long time.

In fact, one can argue that our Churches have followed suit in behaving as such. With corruption. With tampering. With lobbying. With downright cover ups. It becomes difficult to tell the world of Jesus' love and what this faith can do for your life - being different from the rest of the world - when your local Catholic Parish covers up the molestation of boys. Let's be completely real.

Maybe we should read Matthew 7:1.

Yet, this all leads me into what you can probably tell I am - disappointed.

When the political spectrum has taken up so much space within our existing bubble, it has been difficult to make space for other things, but really, to deal with the mess that comes across your TV screen every night. And that's regardless of what news you consider "your news". But even that's a different story for another post.

But what has been so disappointing is the outright overview of those who want to identify as faith-based individuals, and the complete lack of action by our community during this administration. For me, faith in this country has become - now more than ever - a dichotomy of political power and expression.

It is amazing to me how someone of faith can proclaim a man for the top leadership spot in the country - and overlook many of his moral bankruptcies. The short answer is of course we know faith typically equals red and right. But at what point?

We've already seen studies that the majority of younger Christians aren't tied to political structures, and that's great. But before the next rising generation gets here, how do we deal with this impending collapse of faith - like, real, practical faith - for our country?

When does the Christian community look itself in the mirror and wonder what exactly are we doing? Because nothing in the Bible states that voting GOP brings you closer to God. Nor voting left, for that matter.

Or is it what I feared? That to some, faith is about comfort of life, just like "MAGA" times were. And getting back to that comfortability and protected privilege (for those who have it) is more important than 1 Corinthians 13:4-8.

Or even dare I say, is it more important than the economy?

Regardless, here we are. In a country where faith is being tossed around in the justification of the displacement of children, as they are being ripped from their parents as "god's calling".

And the community that should be out in front of this, should be calling for love, for peace, for a different side and take, are idly standing by out of political affiliation, because it doesn't affect them, or downright, deep down, they approve of this - which is more chilling than anything else than can challenge this faith today.

Here we are today. This is how we use the Bible.

Yet, all I continue to be left with is, what would Jesus do?

Something tells me Jesus wouldn't be for this. Any of this.