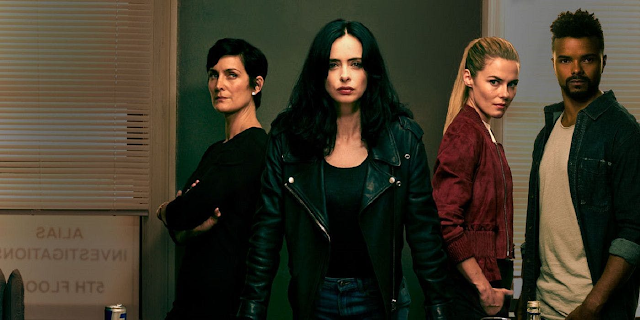 1. Washington Capitals - For the third year in a row, the Stanley Cup playoffs has captured the keen interest of this super casual hockey fan. The Caps win was awesome, and from what I know (and have read) about Alexander Ovechkin (including his epic celebration on social media), this has been a long time coming.

1b. Golden State Warriors - Another year, another dominating win for the Warriors. It's business as usual as this monster of a dynasty continues to run all over the NBA. Three titles in four years. Dynasty.

2. TJ Oshie - His post game comments were touching. So incredibly touching. And for this guy who has a father who suffers from dementia, it was something I could relate to. I became a fan of this guy after that.

3. Jessica Jones - I FINALLY got around to watching season two of Jessica Jones, and yes, it's even better than the amazing first season. Give it a watch if you haven't yet.

1. Deported Pizza Delivery Man - This story is heartbreaking. In the midst of all of these deportation and immigration debates, not to mention, the astounding arrogance and xenophobia that comes with it, this story was heartbreaking. Glad to hear a judge has stopped his deportation.

2. Trump Invitation Withdrawal - Comical. I try to refrain from placing our President in the "down" section, but him stating he wasn't inviting either NBA team AFTER they stated they weren't interested in going is classic Donald Trump.

3. CM Punk Backlash - I admire CM Punk. There is a part of me that identifies with him - the loner that is brutally honest and really does things his own way. I admire him for trying and chasing his UFC career, even though it's been an outright disaster. However, the world of wrestling (fans and workers) who continue to berate him and act as if Punk "owes" the business is comical.