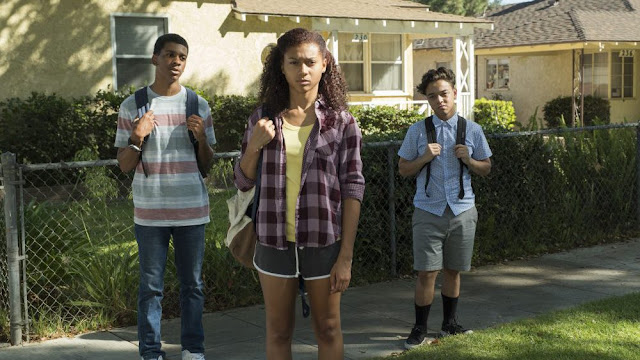 1. World Cup - You know, overall interest in America might be drastically down this time around for the World Cup, but I'm glad I live in a city that embodies that international flair. The World Cup has been absolutely outstanding thus far, and really, so unpredictable. And if you're in an area that is World Cup crazed, it's been so much fun to pop in anywhere and talk World Cup.

2. Alaska Airlines In-Flight Kindness - This story is fantastic. Really, we need more news like this in the mainstream coverage, and not just something we settle for going "viral". Someday, someone - anyone? - will start a news station featuring GOOD and POSITIVE news ONLY. The world isn't as bad as news cycles portray.

3. "Not on My Block" - I'm a few episodes into this Netflix Original and I'm absolutely loving it. The touching on life - real life - in inner cities as a person of color and how we grow up navigating our way in that life is indeed unique. I'm happy to see a show that expresses this experience, and yes, it's totally entertaining - and signed on for a Season Two!

1. Immigration Politics - What an absolute disaster this week was! Total disaster. What's even worse is hearing and seeing so many - on both sides of the major parties - politicize this topic fo gain. Really?! Even worse? Hearing some address the topic without experience or true understanding of immigration. The privilege is crazy, and he hypocrisy of those who one minute want to claim their european roots, then suddenly turn around and try to shut the door on others is mind-boggling.

And of course, to top it all of, was our President who stood firm on his stance right up until suddenly about-facing and trying to save face in the whole ordeal. Again, total disaster.

BTW - Add "we are a nation of laws" to the dumpster fire of political rhetoric and mantra I can't stand. Stop it. Slavery and Jim Crow were also laws. It's so lame...I can't...I'll save this for a full post.

2. Junior Lesandro-Feliz - Completely wrenching story. I don't even know what words to place here...just horrific. Hope they throw away the key on those five scumbags.

3. Antwon Rose - Another young black male killed by the hands of police in America. Just another day. SMH.

3A. Erin Carey - Another young black male killed by the hands of police in America. And this one, they could have saved and didn't even try. It's unfathomable. SMH.

3B. Wisconsin Rape Verdict - It's a bit apples to oranges - but it's related based on racial privilege in America - specifically white privilege. Two young black men die unarmed, and in this case, a young white serial rapists gets three years in prison based on "credit". A serial rapist got three years based on a discount sentence? What?!! S.M.H.

1. Chris Lewondowski - "Womp Womp"? I couldn't careless about identity politics, especially on this topic - that comment was heartless and disgusting. Worthy of being an ass clown.