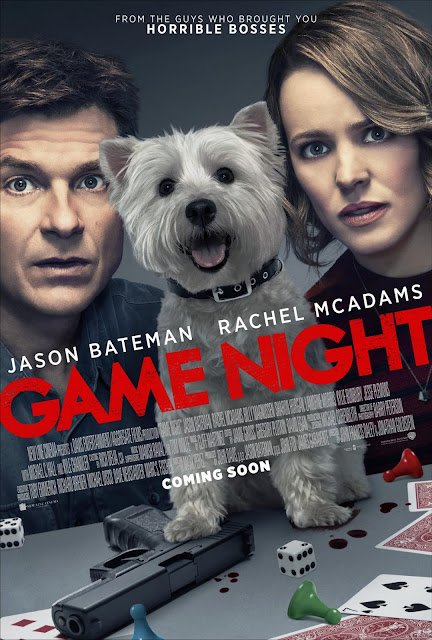 For a group of friends, a game night goes horribly wrong leaving them in the throws of the most intense real-life mystery.

Any scene with Gary the neighbor Police officer.

"You're like a double threat. Brains... and you're British."

Game Night was well...interesting. Upon seeing the title, I immediately thought of Date Night, which was a pretty funny movie with a very interesting plot line. So yes, I was throughly intrigued on how a game night can go so wrong, that it would be adventurous and entertaining.

It was...to a certain extent. The film got there by setting up characters who were obsessed with game nights, but overall, the plot left something to be desired. In fact, it over did things, and overcooked the heck out of what would have been a fine film.

Without giving too much away, the film jumped the shark with way too many plot twists and swerves, and the ending became wayyyyyyyyy too over-the-top.

Regardless, holding the film up was indeed the cast of talent which was pretty strong, along with some really funny moments and cheeky lines. Jessie Plemons easily stole the movie in his role as Gary the neighbor police officer. All of his scenes were hilarious, and so awkwardly entertaining.

All in all, this film is a good watch if you need to pass some time, or if you have it on in the background. Don't expect much, and it won't disappoint you.